Obama asks for re-election with plea to reignite hope 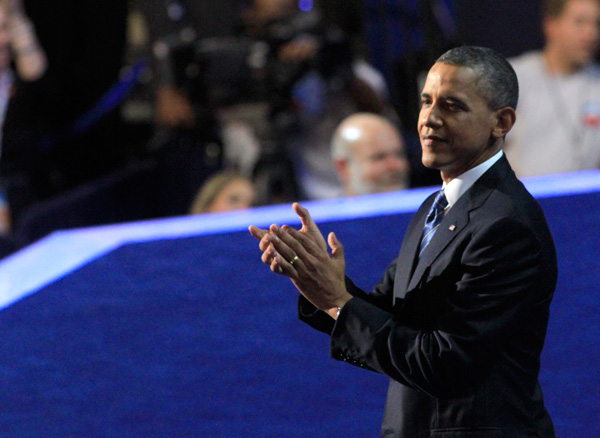 CHARLOTTE, N.C. — With his presidency on the line, President Barack Obama on Thursday asked for more time from voters, acknowledging that despite his lofty goals of hope and change, the economy is going to take years to recover.

As he sought to regain trust from a disaffected electorate weary of months of high unemployment, Obama warned of tough times as the nation emerges from what he said are “challenges that have built up over decades.” But he offered a rousing defense of his stewardship and insisted his vision — not that of his Republican rival, Mitt Romney — will lead to true prosperity for the middle class.

“Know this, America: Our problems can be solved. Our challenges can be met,” Obama said. “The path we offer may be harder, but it leads to a better place. And I’m asking you to choose that future.”

In a speech that at times seemed far from the soaring rhetoric of his first nomination speech, Obama asked the crowd to “rally around a set of goals for your country.”

After attacking Romney for failing to offer specific proposals at the Republican National Convention in Tampa, Fla., last week, Obama outlined a series of goals including creating 1 million new manufacturing jobs, recruiting 100,000 math and science teachers and reducing the deficit by more than $4 trillion.

“They want your vote, but they don’t want you to know their plan,” Obama said. “And that’s because all they have to offer is the same prescription they’ve had for the last 30 years.”

Republicans immediately called the goals scaled down or recycled promises from 2008.

With polls showing the race even, Obama needed to enthuse a dispirited base and persuade the last few undecided voters that his prescription for prosperity will restore the middle class.

Obama cast the election as a choice between “two different paths for America,” warning that “over the next few years, big decisions will be made in Washington, on jobs and the economy; taxes and deficits; energy and education; war and peace.”

Obama blamed Republicans for preventing him from accomplishing more, but he did not fully explain how he would work with House Republicans in the future. He took some swipes at Romney, particularly on foreign policy, but he only once mentioned him by name, when he spoke about his disdain for providing tax breaks to the wealthy.

“No party has a monopoly on wisdom. No democracy works without compromise,” Obama said. “But when Governor Romney and his allies in Congress tell us we can somehow lower our deficit by spending trillions more on new tax breaks for the wealthy — well, you do the math. I refuse to go along with that. And as long as I’m president, I never will.”

He delivered a forceful defense of his record, but at the same time he asked for patience, invoking Franklin D. Roosevelt’s efforts to bring the U.S. out of the Great Depression — “the only crisis worse than this one.”

“I won’t pretend the path I’m offering is quick or easy. I never have,” Obama said. “You didn’t elect me to tell you what you wanted to hear. You elected me to tell you the truth. And the truth is, it will take more than a few years for us to solve challenges that have built up over decades.”

And he made the case for an active government, saying recovery “will require common effort, shared responsibility, and the kind of bold, persistent experimentation that Franklin Roosevelt pursued.”

Republicans have lambasted Democrats for looking to government to solve problems, and Obama included a caution to his own side, noting that it “should remember that not every problem can be remedied with another government program or dictate from Washington.”

He sought to use his platform — a major prime-time speech attracting possibly 40 million viewers across the country — to woo the last undecided voters at a time when campaign officials said Americans were just starting to pay attention after returning from their summer vacations and Labor Day holidays. As he arrived on stage, the crowd broke into chants of “Four more years” and waved blue “Forward” signs.

Hour after hour Thursday, delegates heard praise of Obama’s accomplishments — his actions to stabilize the economy, passage of health care legislation that Democrats have sought for decades, the rescue of the auto industry and the killing of Osama bin Laden.

Obama’s message, though, could be eclipsed Friday by the release of an August jobs report that’s not expected to be a vast improvement over the sluggish growth that has dogged his administration and kept the unemployment rate stuck firmly at over 8 percent for 42 months of Obama’s term.

Obama sought to excite his base hours before his address, apologizing via conference call to thousands of disappointed supporters who held tickets for a scrapped outdoor stadium address.

Polls suggest voters are uncertain about Obama’s ability to return the U.S. economy to full health, and he promised a speech “laying out what are the stakes in this election and what my vision for the future is.”

Obama’s speech capped a three-day Democratic convention that was not without mishaps. A flap over a decision to strip from the party platform — and then reinsert — the word “God” and language that asserts Jerusalem is the capital of Israel, threatened to overshadow much of the message and embroiled senior party officials in a no-win political battle.

Delegates began streaming into the arena hours before Obama’s arrival on the final day of the convention, which included a speech from his vice president, Joe Biden, who lately has hit some rocky patches on the campaign trail. Biden’s son, Delaware Attorney General Beau Biden, officially nominated his father for vice president. Biden, sitting in the stands with his wife, smiled and waved.

In his acceptance speech, Biden relished the role of attack dog that the vice president often plays, but he also sought to give an inside look at the steep challenges Obama faced when he came to the White House.

“Folks, I’ve watched him,” Biden told a hushed arena. “He never wavers. He steps up. He asks the same thing over and over again: How is this going to work for ordinary families? Will it help them? And because of the decisions he’s made, and the strength the American people have demonstrated every day, America has turned the corner.”

Sen. John Kerry, a former colleague of Obama’s in the Senate and the party’s 2004 presidential nominee, chided Romney for not understanding the importance of killing bin Laden, calling the Republican ticket “the most inexperienced foreign policy twosome to run for president and vice president in decades.”

“It took President Obama, against the advice of many, to give that order to finally rid this Earth of Osama bin Laden,” he said. “Ask Osama bin Laden if he is better off now than he was four years ago.”

In a surprise, former Rep. Gabrielle Giffords, shot in the head two years ago in Arizona, was escorted slowly out on stage, limping as she walked to the center to lead the audience in the Pledge of Allegiance. “Gabby!” the crowd gasped and shouted, leaping to its feet. As she made her way across the stage a final time, she turned one last time toward the cheering delegates, blowing them kisses.

Even before Obama took to the stage, there were questions about whether the campaign could muster as much enthusiasm as 2008. His speech was originally scheduled for the 70,000-seat Bank of America Stadium, where the NFL Carolina Panthers play, but convention officials moved to the smaller indoor venue on Wednesday, citing a forecast for thunder and lightning.

Republicans mocked the “downgrade” to the 20,000-seat Time Warner Cable Arena, accusing Democrats of being unable to fill the larger stadium as they had in 2008, when more than 80,000 people crammed into Denver’s pro football stadium to hear Obama give his convention acceptance speech.

The downsizing of venues led to some cancellations, including the band Earth, Wind & Fire. But delegates and supporters heard from the Foo Fighters, Marc Anthony, Mary J. Blige and James Taylor, who delighted the crowd when he quipped between songs, “I don’t get it. I mean, I’m an old white guy and I love Barack Obama.” Outside, the arena supporters rallied, chanting Obama’s 2008 anthem: “Fired up! Ready to go!”

Obama spent the day at his hotel, visiting with first lady Michelle Obama and working with aides to tweak his speech. He leaves with Biden and their spouses on Friday, flying to New Hampshire and Iowa for campaign events before a two-day bus tour of the largest swing state, Florida, over the weekend.

The race could come down to as-yet-undecided voters in a few swing states, and Obama’s chief strategist, David Axelrod, said Obama will be speaking to supporters as well as voters who are “legitimately trying to decide and are tuning in.”