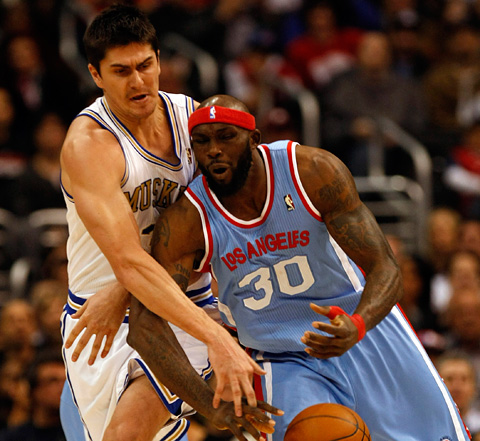 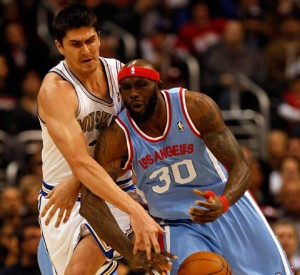 LOS ANGELES — Minnesota Timberwolves forward Derrick Williams returned to Los Angeles on Tuesday night and really looked at home for the first time during his rookie season in a 109-97 victory over the Los Angeles Clippers at Staples Center.

(Former Iowa Hawkeye Reggie Evans of the Los Angeles Clippers has the ball knocked away by Darko Milicic of the Minnesota Timberwolves during the first half at Staples Center in Los Angeles, California, on Tuesday, February 28, 2012.)

Or at least for the first time since last Wednesday.

The No. 2 overall pick in last summer’s draft, Williams has watched far more than he has played this season, although that now is changing in the last game before and the first game coming out of the All-Star Game break.

One game after he played the entire fourth quarter in an improbable comeback victory over Utah, Williams delivered THE performance of his young NBA career by nearly having more points than minutes played.

Williams scored a career-high 27 points and Michael Beasley answered 27 of his own off the bench, including 13 in the fourth quarter as the Wolves turned a 10-point, third-quarter deficit into a 17-point lead with fewer than 3 minutes remaining.

Just up the freeway from where he played his high-school ball, Williams got his opportunity Tuesday because Kevin Love found early foul trouble trying to defend Clippers All-Star forward Blake Griffin.

Williams stepped forth and scored from all over the floor — muscling up put-back baskets one moment, scoring a rainbow jumper he turned into a three-point play the next — on a night when the Wolves moved over .500 (18-17) for the second time this season.

His play kept him on the floor while Love watched down the stretch after suffering a rib contusion that left him available to play with a padded vest.

Williams’ performance pushed the Wolves into contention and then Beasley took them the rest of the way.

The Wolves embarked Tuesday on a ferocious part of their schedule that coach Rick Adelman contends will determine more than whether they are a playoff contender.

“We’re going to find out who we are, that’s basically what it is,” Adelman said of a stretch where the Wolves play three games in three nights and 11 of 15 on the road. “We’re either going to win some games on the road against good teams or we’re going to be in trouble.”

The Wolves started that stretch by winning for the fifth time in six games and by beating the Clippers.

The last time these teams played, Chris Paul and Caron Butler sat out injured, Mo Williams got himself ejected from the game after being nearly unstoppable, Kenyon Martin was still in China and the Wolves won on Love’s theatrical three-pointer at the final buzzer on ESPN’s late Friday night game five weeks ago.

This time, Paul played, facing Wolves rookie Ricky Rubio on an NBA court for the first time, but…

“Yes, but I play against him in Olympic Games and I know him,” said Rubio, who started at age 17 for Spain in the 2008 gold-medal game in Beijing. “He’s a tough guy. He knows how to play.”

Griffin and Love played to a relative draw during that January game, but Love’s memorable winning shot was enough to make TNT analyst Shaquille O’Neal strip down to his skivvies the next week, fulfilling a promise he made that he’d wear only his underwear on set if Griffin didn’t outplay Love in a matchup of disparate power forwards.

This time, Love fought early foul trouble trying to defend Griffin from the opening tip and Griffin proved the Wolves have no defensive answer — not Love, not big Nikola Pekovic, not even Darko Milicic, who proved himself something of a Blake Buster five weeks ago.

Griffin scored 30 points, but had 29 by the end of the third quarter and scored just one in the fourth quarter.