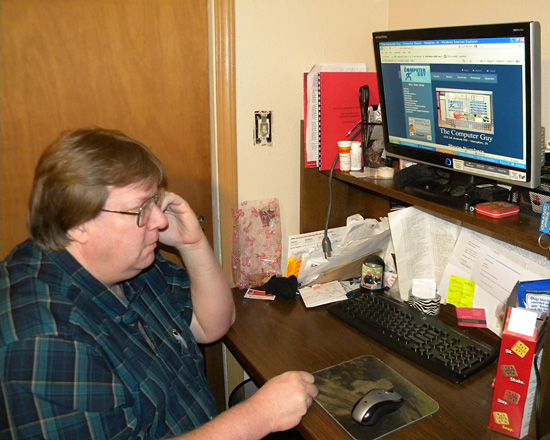 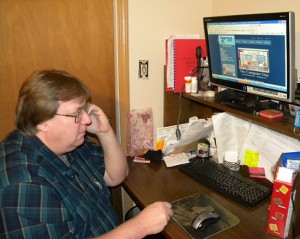 In this time of self-service, there are still those with the “old school” way of thinking.  Give the best service you can and your customers will keep coming back.   Pat Palmer, of Hampton, otherwise known as The Computer Guy, is just that kind of business man.  He wants people to know, “housecalls are NOT dead.”

Pat will travel anywhere within a 45 miles radius to fix, set-up, pick-up or drop off your computer. This in not a service easily found these days.

“I will travel to your house in bad weather, whether you have dogs, or even if you live on gravel roads,” says Pat.

With this being the winter months in north Iowa, all of us can appreciate what a difficult task this can become.  We can also appreciate the peace of mind of not having to go out ourselves.

So, if your computer comes down with one of those nasty winter virus’s, or just don’t feel like working right, the computer doctor is the one to call for the best home service.  There might be cases where he will have to take the poor thing to the computer hospital, in Hampton, and run some tests, but he’ll bring it back as soon as it’s feeling better.

Pat’s background in computers can be found on his website as well as how he became “Your Computers Best Friend,” but one story that isn’t included is how Pat and his father, Roger, really got started.

Pat explains about the first time he ever worked on a computer, “My dad brought home a computer one day, back in 1980, from Radio Shack and said, ‘I’ll bet you $20 that you can’t get it running.’ Well, I got it running.  I won the $20, and I’ve been working on computers and learning more about them every since.”

Pat’s business, The Computer Guy, was founded after working with computers since the age of 14. While still in high school during the early 80’s, Palmer partnered with his father, Roger, in a home-based business called Palmer & Palmer Computer Services. After high school graduation in 1983, he went on to further his education at NIACC in Mason City, Iowa.  During that time he began a 17 year radio career. In the midst of that career, his passion for computers was still ablaze and he established The Computer Guy in 1996. Palmer found that by offering quality services at reasonable rates, he could gain the trust and respect of those whose computers he serviced, thus building his business.

After leaving radio in 2000, Palmer went to work for Midwest Wireless, a Minnesota based cellphone carrier that had an office in Mason City, Iowa, but continued his work as The Computer Guy. Eventually in June of 2006 he struck out on his own and now dedicates his full time efforts into his  business that he loves, serving local clients as well as national computer accounts like Dell, Staples and Sony.

Since 2005, Palmer has been trained and certified by Dell,  Hewlett-Packard, MicronPC and Sony Vaio and has also gone on to earn the CompTIA A+ and CEA CompTIA DHTI+ Certifications. He feels that knowledge is power and knows training never ends, especially in the world of computers and technology.

In April of 2009, Palmer decided to take the bold step and move his business to Downtown Hampton into a retail storefront. He purchased his parents’ computer paper and supply business and  on July 1st, 2009, he hired an employee, opened the doors and hasn’t looked back.

The Computer Guy serves Northern Iowa, with free pickup and delivery service in a 45-mile radius of Hampton, Iowa.  Palmer also offers remote assistance computer repair services for those who live around the corner or around the globe.

To learn more more about the Computer Guy, watch Pat explain about his business: