JUCO Baseball: NIACC’s Kramer strikes out 18 in win over Southwestern

This news story was published on April 11, 2021.
Advertise on NIT • Subscribe to NIT 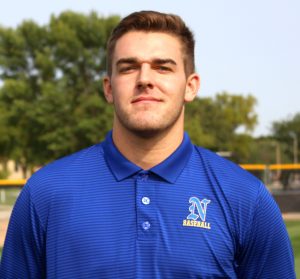 CRESTON – Left-hander Collin Kramer struck out 18 batters and tossed a complete-game shutout in NIACC’s 13-0 seven-inning win over Southwestern in the second game of Sunday’s ICCAC doubleheader.

Kramer, a sophomore who has signed with UNC-Charlotte, took a perfect game in to the fifth inning and a no-hitter into the sixth inning. The former St. Ansgar standout completed the shutout allowing three hits.

The shutout was the first by NIACC since the Trojans blanked the Luther College Junior Varsity 11-0 on May 6, 2019.

The 18 strikeouts by Kramer (3-2) was the most by a NIACC pitcher since Tim Black struck out 16 in a 2-0 win over Madison College in the opening round of the 2013 NJCAA Division II World Series.

NIACC (10-17 overall, 5-15 in the ICCAC) won the first game of Sunday’s doubleheader 10-5 as Franco Barbieri was 2 for 3, including two triples, with four RBIs. Nic Nelson and Noah Juliar both drove in two runs for the Trojans.

NIACC returns to action Wednesday at home in an ICCAC twinbill against Iowa Lakes. The first game at Roosevelt Field is slated to start at 1 p.m.