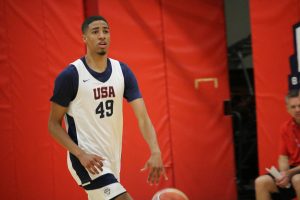 AMES, Iowa – Iowa State sophomore Tyrese Haliburton has been named to the five-man Preseason All-Big 12 team, which was voted on by the league’s head coaches and announced Wednesday.

Haliburton, an Oshkosh, Wisconsin native, ranked among the nation’s top freshmen in a number of categories last season. His all-around game has drawn rave reviews as he averaged 6.8 points, 3.6 assists, 3.4 rebounds and 1.5 steals last season. He became one of just four freshmen in college basketball since 1992-93 to record 125 assists, 50 steals and 30 blocks.

He also ranked second nationally with a 4.46 assist-to-turnover ratio, which included a school-record 17-assist game (Southern) in which he had just one turnover.