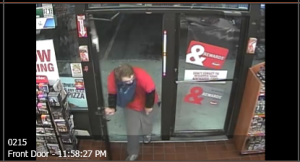 On Monday, August 1, 2016, at 12:02 AM, the Ames Police Department responded to a report of an armed robbery at Kum and Go, 4506 Lincoln Way. According to the clerk, the suspect entered the store and demanded money from the clerk while displaying a knife. The suspect left the store with an undisclosed amount of money. The suspect was last seen running east of the store. Officers searched the area, but were unable to locate the suspect. No one was injured during the incident.

The suspect was described as a white male adult in his twenties, approximately 5’7” to 5’9” tall, with a stocky build. The suspect was wearing a blue shirt over his face, gray sweat pants, and a red t-shirt over a long sleeve black shirt.