DES MOINES – With the general election campaign beginning in earnest in Iowa today, Senator Chuck Grassley needs to address the disturbing reality of Donald Trump’s racist beliefs, says Progress Iowa, a liberal political group out of Des Moines. Instead, they say, he’s launching an attack on a Supreme Court Justice. 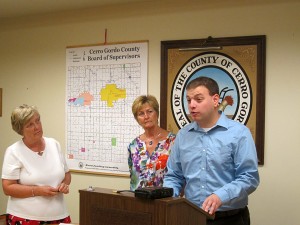 “Enough is enough. Donald Trump’s racist attacks on a judge have further proven what most of us have known all along: Trump is a bigot who can’t be trusted with the Supreme Court. Senator Grassley’s obstruction on the Supreme Court nomination was indefensible before – it’s downright ludicrous now. He is leading a historic obstruction of basic government functions so that he can delay for a potential racist President.

Grassley’s decision to respond to criticism by attacking Justice Sotomayor today is even more bizarre. Apparently Senator Grassley can’t come up with a good enough reason to defend Trump, so he instead criticizes the one Hispanic member of the Court. He’s clearly feeling the pressure.

If Trump believes a judge can’t be impartial because of their heritage, he has no place nominating Supreme Court Justices. Would he only choose white nominees? Grassley said yesterday he disagreed with Trump’s statements. If he’s so offended by them, why is he still keeping a Supreme Court open for him to fill? Words aren’t enough – Grassley needs to act and do his job already.