This news story was published on August 29, 2015.
Advertise on NIT • Subscribe to NIT 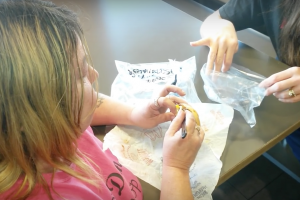 Still image from a public Youtube video of Billie C. Wentzel sitting with a McDonald’s employee, picking alleged fly larvae off a burger

HAMPTON – A Hampton woman recently in the news for munching burgers that contained fly eggs is battling a felony drug charge in Franklin county.

Billie C. Wentzel, age 49 of Hampton, was charged in January of this year by Hampton police with felony possession of marijuana with intent to deliver and failure to affix a drug stamp.

In March, Wentzel entered a not guilty plea to both charges and a jury trial was set for May. Her lawyers filed four times since then to delay the trial until the latest trial date was set for September 10. However, a fifth delay was filed on August 21. Now, an evidence suppression hearing is scheduled for October 10 and a trial date does not appear to be set.

Wentzel has been free as she awaits trial. She is affiliated with Weasel’s Den in Iowa Falls and Weasels Den Too on South Federal Avenue in Mason City, which claims it is “a smoke shop providing smoking accessories, vapor products and clothing accessories”.

Wentzel was in the news last week when she made a widely-publicized claim that she bought 6 burgers from a McDonald’s restaurant and that one of them contained fly larvae. Five of the burgers were eaten, she said, and the sixth was brought to the sheriff’s office, the health department, and an insect expert in Ames.  The Cerro Gordo County Health Department confirmed fly larvae was on one of the burgers.  Legal action may be imminent in that case, as well.