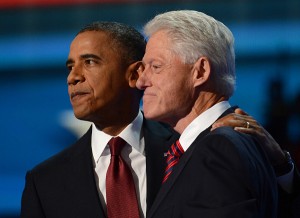 CHARLOTTE, N.C. — Declaring that “America is better off” than it was when Barack Obama became president, former President Bill Clinton lauded the record of his Democratic successor and skewered his Republican rival, depicting the choice before voters as one between “a winner take all, you’re on your own society” and a “we’re all in this together society.”

His voice thinner and raspier, but his oratorical gifts unchanged, Clinton delivered a 48-minute address that alternated between lengthy discussions of policy and partisan jabs leavened with humor and admonitions that “this is important, I want you to listen.”

Mitt Romney, he said, would “double down on trickle down.” His own administration had balanced the budget four times, simply by “arithmetic,” he said. By contrast, Romney’s “numbers just don’t add up.”

Republicans had quadrupled the national debt in the 12 years before he became president and doubled it again in the eight years that followed, Clinton said. Romney’s plans, he warned, would “explode the debt and destroy the economy.”

And he sought to lend to Obama his own image as a president who practiced bipartisan compromise.

“What works in the real world is cooperation,” he said.

“Unfortunately, the faction that now dominates the Republican Party doesn’t see it that way. They think government is always the enemy,” he said, “and compromise is weakness.”

The Republican argument, he said, boiled down to this: “We left him a total mess, he hasn’t cleaned it up fast enough, so fire him, and put us back in.”

“As another president once said, ‘there they go again’” he said, quoting the Republican icon, Ronald Reagan.

The former president, his image resurrected in the years after his tainted presidency, was greeted with adulation on the floor of the convention. Even before turning over the second night of their convention to him, the Obama campaign has relied heavily on Clinton. A TV advertisement featuring Clinton has been airing heavily in North Carolina and Florida, both battleground states with a large number of the more conservative, financially hard-pressed Democrats among whom Clinton is more popular than Obama.

In an election dominated by voters’ concerns over the economy, Clinton sought to offer Obama the credibility that comes from having presided over a period of rapid economic growth, near full employment and balanced budgets.

“He has unbelievable legitimacy as the only president who has brought a generalized prosperity,” said Stanley Greenberg, who was the pollster for Clinton’s 1992 presidential campaign. When voters talk about the late 1990s — Clinton’s second term — they often say “that’s when I had money,” Greenberg said.

Voters also don’t see Clinton “as a shill for Obama,” Greenberg said, in part because of the battle between Obama and Hillary Clinton for the 2008 Democratic nomination. “He has the distance and independence to make the case.”

Clinton, himself, emphasized that point in an interview before the speech.

“We haven’t been close friends a long time or anything like that,” Clinton told NBC anchorman Brian Williams. “It is, from my point of view, not a transaction or a bromance or any of that sort of stuff.”

NBC was the one network not to air Clinton’s speech live because of its contract to air the night’s NFL season opening game between the Cowboys and Giants.

Clinton’s speech formally nominated Obama as the party’s presidential candidate. The pro forma roll call ratifying the nomination began after the speech, with Obama officially winning the nomination shortly after midnight eastern time. Clinton, himself, had already moved on to a late-night Obama fundraiser.

Clinton’s speech contrasted sharply with the partisan and left-leaning tone that dominated much of the evening as Democrats trotted out a litany of politically damaging remarks that Romney had made, depicting the Republican as a man who would govern the country for the rich.

From “let Detroit go bankrupt” to “I like being able to fire people,” convention speakers threw Romney’s words back at him, sometimes foregoing context to highlight remarks that likely will be featured in television advertisements over the next two months.

Immediately before Clinton, Elizabeth Warren, the Harvard law professor and Democratic candidate for Senate from Massachusetts, cited another Romney line that Democrats delight in attacking.

Angry voters are right to feel that “the system is rigged,” she said, but Romney would only worsen the inequity.

“No, Gov. Romney,” she said, “corporations are not people.”

But before making those attacks, party officials had to resolve some word problems of their own. They departed from their carefully scripted proceedings to do damage control and reinstate language to their platform that referred to God and affirmed Jerusalem’s status as Israel’s capital, subject to negotiations between Israel and Palestinians. The language, which had appeared in the 2008 party platform, had been dropped this time around, but the party beat a hasty retreat after Republicans noticed the omission and pounced on it.

Democratic officials said the reversal of direction had been personally ordered by Obama.

“Why was it changed in the first place?” a Democratic official said Obama had asked, when told of the removal of the language about God. The answer to that question remained unclear Wednesday evening.

The platform switch came as a rare departure from an agenda that otherwise mixed denunciations of Romney with testimonials to portions of Obama’s record, including his auto industry bailout and his health reform law.

Rep. Chris Van Hollen, the top Democrat on the House Budget Committee, jabbed at Ryan and the “debt clock” that the Republican convention featured. If Ryan had been honest, he would have pointed at the debt clock and said “we built that,” Van Hollen said, arguing that much of the debt stemmed from actions taken by the George W. Bush administration.

As they denounced Romney, the speakers also highlighted portions of Obama’s record. A sea of blue and white signs proclaiming “1.1 million auto jobs saved” greeted speeches about the administration’s bailout of the auto industry.

Benita Veliz, an undocumented immigrant from San Antonio, lauded Obama’s decision this summer to provide protected status to illegal immigrants who had been brought to the United States as children. Her appearance marked the first time that an acknowledged illegal immigrant had addressed either party’s presidential nominating convention.

For his part, Romney laid low a second day, locked away in debate preparation at a retreat in Vermont. But he briefly surfaced in a Fox News interview, saying granting Obama a second term would be “a big mistake.”