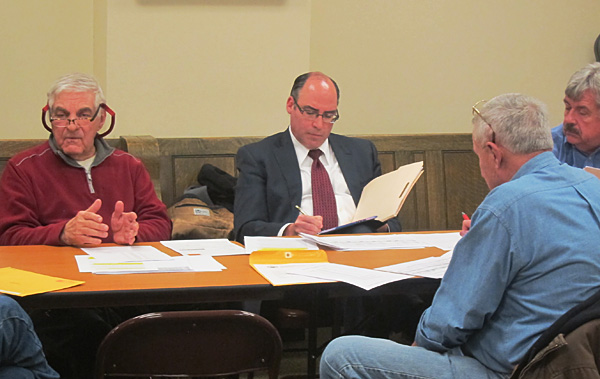 AMES, Iowa – Just two of Iowa’s 99 counties have achieved gender balance on appointed boards and commissions, according to a new report by the Carrie Chapman Catt Center for Women and Politics at Iowa State University and Friends of the Iowa Commission on the Status of Women.

The report examines the gender composition of seven boards and commissions commonly found at the county level. This includes the Board of Adjustment, Board of Health, Board of Review, Compensation Board, Conservation Board, Planning and Development Commission and Veterans Affairs. The report also makes note of how many of these boards are found in each county.

Only Johnson and Van Buren counties comply with the gender balance law, according to the center’s report. The code requires one gender make up no more than half of the membership on a board or commission with an even number of members. For uneven numbered boards, one gender cannot make up more than half, plus one. However, the law does not require counties to report or track gender balance, which led the Catt Center to compile the data.

“We need to see how and to what extent the legislation is being implemented,” said Valerie Hennings, a scholar-in-residence at the Catt Center. “Then we can use these numbers as a way to recruit and educate women about these opportunities to get involved at the local and county levels.”

The data show that nearly all other counties have at least one board that complies with the state law for gender balance. Only Hamilton County – which has five boards within the scope of the study – had zero. There are six counties that are still compiling data for the report or have yet to reply to the Catt Center’s request. Still, Hennings is encouraged by the results and the fact that local leaders are working to achieve gender balance.

“County auditors and city clerks recognize that not all their boards are gendered balanced, and they’re asking for suggestions to recruit more women,” Hennings said. “This has led to conversations about what does work and how we can best recruit the individuals needed to achieve gender balance.”

Both Hennings and Dianne Bystrom, director of the Catt Center, hope the report leads to opportunities to educate women about serving on local boards. As part of its partnership with the Catt Center, the Friends of the Iowa Commission on the Status of Women plan to create an online “talent pool” for local leaders to utilize.

“Friends will build a database of women who are ready, willing and able to serve on a local board or commission,” said Michelle Durand-Adams, past president of Friends. “We will collaborate with women’s organizations all across the state to help populate the database. Community leaders may view the Friends database to identify local woman to fill open positions.”

Not just an issue for women

It’s also important to note that the gender balance legislation is not solely intended to recruit women, said Bystrom. She points to municipal boards, such as public libraries, as examples in which men are often underrepresented. Research shows that gender balance brings a variety of views and experiences to boards or commissions.

There’s also evidence that women who serve in this capacity may consider running for an elected office in the future. Recruiting more women candidates for political office is an ongoing goal of the Catt Center and Friends.

“By promoting women to serve on these boards and commissions, we hope that they’ll build a political resume and then see the potential of running for office at the local, county and even state level in Iowa,” Bystrom said.

“I believe a broader inclusion of women in determining the use of public tax dollars and policy directions at the city and county levels will make our government more responsive and effective,” Peters said.

The Catt Center plans to add to the report as it receives information from the remaining six counties. Hennings is also collecting data for Iowa’s 99 county seats and the 200 largest cities, which includes some county seats, to see where municipalities rank on achieving gender balance. So far, more than 100 communities have responded, and nine comply with the state law. A full report should be complete this summer.

However, compliance, as defined by state law, does not mean women hold an equal number of seats on local boards. For example, of the six appointed boards and commissions in Johnson County reviewed in the study, only 39 percent of the 28 total seats are held by women. The boards are considered gender-balanced, but because some boards have an uneven number of seats, men outnumber women.

Iowa is the only state in the nation with state code that requires gender balance on boards at the state, county and municipal level. The law does include an exception to the rule if local leaders cannot find a qualified candidate, after three months, to comply with the gender requirements.

Tim LaPointe, appointed by the Board of Supervisors Four Year Term, Expires June 30, 2015

Dave Theiss, appointed by the Board of Supervisors Four Year Term, Expires June 30, 2015