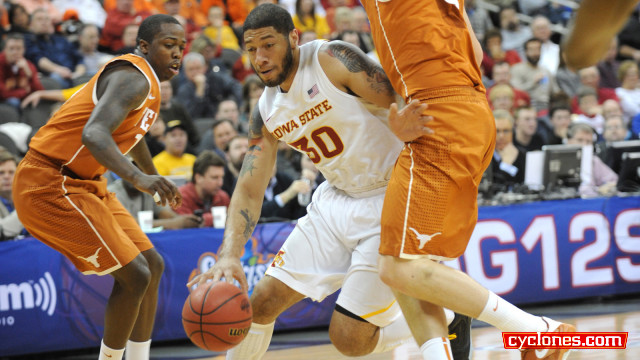 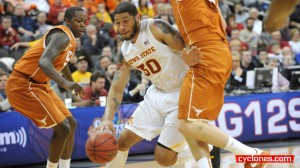 KANSAS CITY, Mo – The No. 25 Iowa State men’s basketball team utilized a 6-0 run in the final minutes to tie Texas 65-65, but a traditional three-point play by J’Covan Brown with 36.3 seconds remaining ignited the Longhorns on a late run.  Iowa State did not score following Brown’s big play and fell 71-65 Thursday in the quarterfinal round of the Big 12 Championship inthe Sprint Center.

Royce White led the way for Iowa State (22-9 overall, 12-6 Big 12 Conference) as the sophomore delivered his 10th double-double of his career with 17 points and 10 rebounds.  Freshman Percy Gibson provided a needed spark off the bench, tallying 10 points on 4-5 shooting in 12 minutes of action.

The Cyclones struggled to hold on to the ball in first half, committing eight turnovers to Texas’ one.  The Longhorns capitalized on Iowa State’s turnovers as they held a 10-0 points-off-turnovers advantage at the break.

The story of the first half for the Cyclones was their stellar play on defense as they held the Longhorns to 10-38 (26.3 percent) shooting from the floor.  Texas’ 26.3-percent shooting was the lowest output by an Iowa State Big 12 foe this season, and the second-lowest by an opponent.  The Cyclones held Mississippi Valley State to 25.8-percent (8-31) shooting on Dec. 31, 2011.

The Cyclones took a 29-25 lead into the lockerroom at halftime and went on a 7-0 run in the opening 1:39 of the second frame to stretch the lead to 36-25.  White was instrumental in the run with a pair of highlight-reel assists.

A pair of Chris Babb free throws eliminated Texas’ lead, as the two sides were knotted at 59 with 4:35 remaining.  The two teams went back forth the rest of the way, but Texas’ late run sealed its victory.

The Cyclones will wait to learn their post-season fate by watching Sunday’s NCAA Tournament Selection Show.