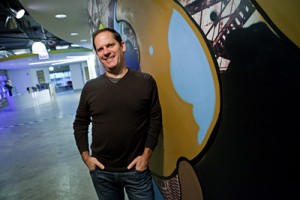 CHICAGO — When Sprint Nextel recently moved its $1.1 billion account from San Francisco-based Goodby, Silverstein & Partners to Digitas Chicago and Leo Burnett, it was one of the biggest wins in Chicago advertising history.

(PHOTO: Tony Weisman is president of Digitas Chicago, an agency that specializes in digital advertising. He is shown at the company’s offices on December 16, 2011.)

Beyond the 300 or so jobs the account will bring to the city, with online-focused Digitas named lead agency, it also represents what may be the tipping point for digital advertising, which has rapidly transformed from a fringe buy to an integral part of the media mix.

“I think it’s a validation of the next evolution of this industry,” said Tony Weisman, president of Digitas Chicago.

Once the insular domain of direct marketers and tech-savvy programmers, online advertising accounted for just a fraction of total media spending in the U.S. at the start of the new millennium. Since then, the medium has leapfrogged every traditional advertising vehicle except television, and it is closing ground fast.

“The Internet has become as important as television to advertisers,” said David Hallerman, principal analyst at eMarketer, a New York-based research firm. “This is where people spend a large share of their time. Marketers chase the audience.”

Online advertising is headed for a 20 percent increase in 2011, far outpacing the 2 percent growth in overall U.S. ad spending, said Hallerman. The sector, which includes everything from search and banner ads to commercial videos, is projected to top $31 billion this year, about one-fifth of the total $157 billion advertisers are on track to spend across all media.

And double-digit growth is expected to continue, with online spending projected to reach $50 billion by 2015, or about 28 percent of the total advertising pie, with TV maintaining its current 38 percent share, Hallerman said.

With smartphones, iPads and high-speed Internet connections opening up content possibilities, more advertisers are exploring ways, both mundane and creative, to stake out turf in the digital frontier.

Search advertising — the sponsored results that appear when googling anything from movie times to mouse traps — is the largest segment at about 46 percent of online spending. But video advertising — the ubiquitous commercials that roll before, during and after viewing selected content — is the fastest- growing format, up more than 52 percent for 2011.

While not calculated in eMarketer’s totals, growing forms of online branding include Facebook pages and sponsored websites, which are the Internet equivalent of infomercials.

“That’s one way that the digital space is changing marketing with more of that sort of nonadvertising-based magnetic content,” Hallerman said.

The advertising industry has been changing rapidly, as digital flows inexorably into the mainstream. While the complexity and novelty of the Internet gave rise to specialty shops and strategic silos within agencies, the lines between traditional and online advertising are beginning to blur.

Founded in 1980, Digitas is one of the largest buyers of digital media in the world. While its name indicates its core mission, the Boston-based agency, which is part of Publicis Groupe, is becoming a force across the full spectrum of advertising, as evidenced by its lead agency status with Sprint.

At the same time, traditional agencies are beefing up their digital capabilities to capture more of the fast-growing online advertising business.

“It’s a race to the middle,” said Kevin Drew Davis, an online advertising veteran who in October joined Digitas Chicago as creative director from DraftFCB. “The big brand shop is trying to grow the digital thing; the digital shops are growing into the brand space.”

Publicis partner Leo Burnett will focus on TV and other more traditional aspects of the campaign as part of Team Sprint. But the largest agency in Chicago has been steadily building its own digital team, said Rich Stoddart, president of Leo Burnett North America.

“We need to lead in this space, we need to push creativity in this space,” Stoddart said. “This is perhaps the most interesting paint box we’ve ever had to play with.”

About one-fourth of Leo Burnett’s annual revenue, which is pegged at $452 million by Advertising Age, is generated through digital advertising, said Stoddart. More than 400 of the agency’s 1,700 employees are considered to be digital experts, a number that has grown by nearly 25 percent through hires this year.

“I think three years from now, 100 percent of the staff will be digital, because it has to be,” he said. “I don’t just want experts, I want people who can create ideas across channels.”

Stoddart likened the path of digital advertising to the “Mad Men” era a half-century ago, when television departments were created to navigate the nascent medium for agencies and clients alike.

“We don’t have a head of TV anymore,” Stoddart said. “There used to be a head of radio before that, and a head of print before that. So this is just the latest chapter in the agency life stage.”

The agency will add two floors next year as its staff of 350 expands to 500, a 40 percent increase, to accommodate both the new Sprint business and organic growth.

Though Weisman concurs that all advertising agencies are “heading to the same place,” he likes the starting point for Digitas, where data has long driven strategy.

“When you grow up in a world with the amount of data that we have and an analytics engine at the center, you think about people as individuals,” he said. “All the data, when you aggregate it, lets you get smarter.”

Weisman said that online advertising will get even smarter going forward, creating an ecosystem that will track and target individual shoppers throughout the buying process. With that continued evolution, and mainstream media migrating to digital platforms, the fastest-growing advertising category circa 2012 may be increasingly difficult to define, or perhaps even an anachronism in the not-too-distant future.

“I think it’s a term that’s going to disappear, over time, and digital is just going to be the norm,” Weisman said.

Sweeping cultural changes are shaping what makes an ad work, digital or otherwise, according to a study by Leo Burnett.

“The face of the American consumer has forever changed,” said Stephen Hahn-Griffiths, chief strategy officer of Leo Burnett. “In 2012, successful brands need to adjust to this reality … or risk losing loyal customers at an alarming rate.”

For example, unconventional family units, the pervasive discount mentality and the need to splurge on an occasional burger are some themes that may play out in 30 seconds or less.

The “Transformation of Aspiration” report identifies six behavioral trends for next year that marketers should heed to resonate with consumers:

The “99 percent” effect: Feelings of economic inequality and unfairness are rampant. A company that treats all customers fairly will earn trust and patronage.

The “Modern Family” model: From single-parent homes to same-sex couples, the average American family does not resemble a 1950s sitcom. Diverse images of family ring true with consumers.

Satisfaction trumps salubrity: Americans are clamoring for healthier offerings at restaurants, but most choose burgers over salads. Offering strapped consumers a small indulgence can go a long way.

Make smartphones smarter for shoppers: With 20 million new smartphone users in 2012, it takes real value added to rise above the noise. Identify problems shoppers are trying to solve and provide practical solutions.