This news story was published on May 25, 2011.
Advertise on NIT • Subscribe to NIT 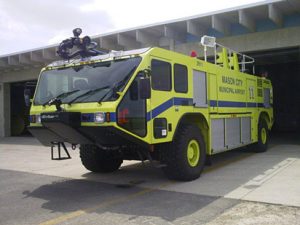 MASON CITY -Utility work that will extend the municipal water supply from Clear Lake to the Mason City Municipal Airport is expected to begin the second week of June as part of an estimated $3.1 million project to build a new fire station at the airport.

Heartland Asphalt of Mason City was the low bidder on the roughly $1 million project to extend Clear Lake water to the site of the new fire station, which will be built to the northwest of the terminal.

A bid opening is scheduled for June 6 to pick the general contractor for construction of the 7,000-square-foot fire station, according to Pam Osgood, airport manager.

The new fire station will put the fire department closer to the main runway. The fire and rescue crew has been able to maintain its federally-required response time of three minutes or less at the current site, Osgood said.

David Sims, operations supervisor at the airport and a member of the fire department, said the new location will cut the response time by 30 to 45 seconds.

Over the past five years there have been a handful of alerts, but no actual crashes at the airport, Sims said.
“It’s all about providing the best safety we can,” Osgood said. “If your family was on a plane that had problems, you’d want the quickest response time possible.”

Besides shortening the response time, the project will alleviate crowding at the maintenance building where the fire and rescue vehicles are stored, Sims said.

The fire station project had to be re-bid after bids last year came in roughly $1 million over the $3.1 million project estimate. The price tag prompted scrutiny of the need for the project and whether the airport could cooperate with the city of Clear Lake to build a station that would serve the city and the airport. Clear Lake is currently building a new station to replace an outdated building.

Osgood said that wasn’t feasible, however, since response times would be inadequate. Since it receives aid from the Federal Aviation Administration, the airport must have emergency response times under three minutes, she said. Neither the Clear Lake nor Mason City departments could get to the airport crash site that quickly, Osgood said.

The project will be funded mainly by federal funds. Some of that money has not been approved yet by Congress. It is expected to be approved in July. If it is not, the building project will have to be put on hold, she said.

The municipal airport has an annual operating budget of about $650,000. It will receive about $235,000 from the city during the fiscal year beginning July 1 and ending June 30, 2012, Osgood said. Other sources of funding are space rentals to Jefferson Bus Lines, Hertz Rent-a-Car, North Iowa Air Service, airlines, and farm income. The airport leases about 250 acres of cropland.

Protective clothing worn by members of the fire and rescue crew at the Mason City Municipal Airport hangs in the maintenance building. Work is expected to begin soon that will provide the fire department its own building. 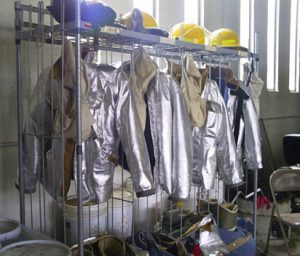