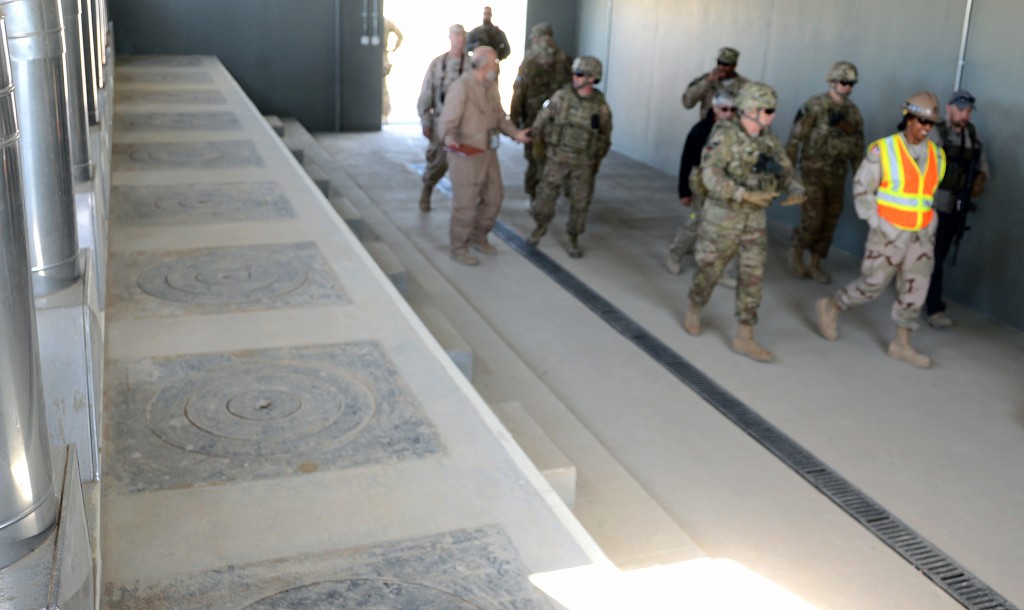 KANDAHAR, Afghanistan – In the remote district of Shorabak, situated in Helmand province, is a newly built Afghan National Army, or ANA, installation which according to Maj. Gen. Michael Eyre, is some of the best construction he’s seen in Afghanistan.

Eyre has been involved with Afghanistan and Iraq reconstruction efforts for years. As the Transatlantic Division commander since April 2012, his staff helps the U.S. Army Corps of Engineers Transatlantic Afghanistan District with their construction oversight mission. He toured the recently completed ANA 215th Corps Combat Logistics Brigade, or CLB, project Jan. 28, eight months since his last visit.

“We’re here to help build quality infrastructure projects so the Afghan security forces have places to live and train to be able to defend their country,” said Eyre. “The USACE men and women here and in supporting districts back home are working hard to complete them as the troop drawdown continues.”

The decision of what to build and where, isn’t the Corps. They act as construction agents, meaning they’re tasked and funded by agencies that do make those decisions. Once an agency identifies a need and receives congressional authorization and funding, the Corps is tasked to build the project. Corps employees contract and oversee construction in accordance with Federal Acquisition Regulations and Corps guidance.

“It’s a difficult environment to build in,” said the general. “It definitely helps to have contractors we can count on to produce quality facilities.”

The original CLB contractor defaulted and the contract was put out for rebid. Turkish-headquartered Metag Construction Trade Co Inc., a project and engineering company, earned the estimated $25.6 million Shorabak contract. According to Eyre the company had issues when they first began building for the Corps in Afghanistan.

“Several years ago we had to really keep an eye on them. However, they’ve stepped it up and are producing some quality projects, like this one here,” Eyre said while surveying the site.

For project manager Eric Aubrey, project engineer Lori Gardner, construction representative Gary Desmarais and Afghan senior quality assurance representative Adress Hakimyar having quality contractors helps. Each of them has many other projects they must shepherd.

At the CLB when issues needed correcting, the contractor was respectful and responsive, making his job easier said Desmarais. It wasn’t just correcting problems; the contractor added quality touches said Gardner. Adding tile instead of epoxy floors and shower doors instead of cheap curtains – things not required by the contract.

“Everything put in was quality and installed with pride,” said Gardner. “They take personal ownership of the project.”

For Hakimyar, as an Afghan, the project is personal, providing a stronger Afghanistan. He’s been working with the Corps for about six years and building a needed capacity. The quality assurance representative, or QAR, program is something the Corps has been using for several years. Corps employees have access to the Shorabak projects, but some project areas are too dangerous and the Afghans, like Hakimyar, are trained to provide oversight at those. As the troop drawdown continues, the number of project sites Corps employees can access will diminish, making QARs even more valuable. In addition, they have a skill which can help build a stronger Afghanistan in the future, even without the Corps.

A ribbon cutting ceremony was held earlier in January for the CLB and another project Eyre toured, a $13.5 million 215th Corps Headquarters Complex also at Shorabak. Speaking at the ceremony, 215th Corps commander ANA Gen. Syed Malok said the facilities will help overcome building shortages for military personnel and streamline activities. Getting the projects are critical steps for the 215th, providing the last bits of tools they need to operate independently, the way International Security Assistance Force officials envision.