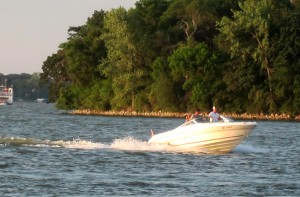 CLEAR LAKE – On August 3, 2019, at approximately 2:30 pm, Daniel Ryan Linderman, 28, of Waukee, IA, was tubing behind a boat being operated by Timothy Heitland of Buffalo Center, IA, when Linderman fell off the tube into the water.

According to witnesses, Linderman was swimming back to the boat when he possibly suffered a medical emergency and went face down in the water for a short period of time. Linderman was wearing a life jacket at the time of the incident. A DNR Water Patrol Officer was nearby and immediately rushed to the scene while one person from Heitland’s boat tried to hold Linderman above water. The water patrol officer and the other person were able to get Linderman’s body into a DNR boat.

Another DNR Water Patrol Officer and a DNR Conservation Officer arrived on scene and took Linderman to shore and performed CPR. He was then transported to MercyOne North Iowa Medical Center in Mason City, where he was pronounced dead.

An autopsy will be performed on Linderman at the Iowa Office of the State Medical Examiner in Ankeny to determine the exact cause of death.