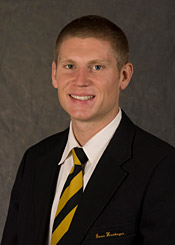 IOWA CITY — Iowa’s men’s basketball program was left for dead Friday in Indianapolis. The season virtually was over but a flicker of hope remained that the team would have an opportunity for postseason basketball.

That hope became reality Sunday when the Hawkeyes were one of 24 teams selected to compete in the National Invitation Tournament. Iowa (17-16) earned a seventh seed and will host second-seeded Dayton (20-12) at 6:30 p.m. Tuesday. Dayton was scheduled to host but the game was moved to Iowa City because two NCAA tournament first-round games are held at Dayton’s arena Tuesday.

“It’s incredible,” Iowa senior Matt Gatens said Sunday night. “You don’t want to take the jersey off and keep playing. It’s a great opportunity to continue to play and wear the Hawkeye uniform and try to keep winning and chase a championship.”

Gatens, a senior, was unsure if his career had ended after Friday’s 92-75 Big Ten Tournament loss to Michigan State. The team returned to Iowa City on Friday, took the day off Saturday and practiced Sunday in anticipation of a postseason bid.

“It was exciting to have a chance to have that feeling of maybe,” Gatens said. “It was up in the air a little what was going to happen. We heard a little both ways. We all figured we had a pretty good shot at it. Nobody knew for sure then we saw our names pop up, and it was a pretty fun experience and an incredible feeling.”

Gatens watched the selection show at a team manager’s apartment because “he had ESPNU.”

“It popped up quick, and we were just going nuts,” Gatens said. “Then a couple seconds later the four freshmen walked in … a second too late but they went crazy. It was exciting to see that reaction and have that moment with them.”

Iowa Coach Fran McCaffery was confident the Hawkeyes would qualify for the NIT based on the team’s four wins over ranked Big Ten opponents. He said he found out about the invitation when it appeared on television. ESPN will air Tuesday’s game, which provides Iowa with national exposure.

“Every time you get a chance to play on ESPN it’s a phenomenal opportunity,” McCaffery said. “It’s privilege, and we appreciate it.”

The winner of Iowa-Dayton will face either third-seeded Oregon or sixth-seeded LSU. Other teams in Iowa’s bracket include Washington, Northwestern, Texas-Arlington and Akron.

The UNI-St. Joseph’s winner will play the winner of third-seeded Drexel or sixth-seeded Central Florida. Other teams in UNI’s bracket include Seton Hall, Stony Brook, UMass and Mississippi State.

It’s UNI’s fourth straight postseason trip. It’s Iowa’s sixth trip to the NIT and first since 2004. It’s also Iowa’s first trip to the postseason since the 2006 NCAA tournament. Tickets are on sale exclusively for season-ticket holders until noon today. Tickets for everyone else are on sale at 1 p.m. Cost is $15 for adults, $5 for students or children under 18. (For tickets call 1-800-IA-HAWKS or order online at www.hawkeyesports.com)

The game provides Gatens with one more chance to play at home, and he’s appreciative of the opportunity.

“It would be great to go out with a win and playing in front the fans and in front of the family on that court,” Gatens said. “It’s really a special opportunity.”