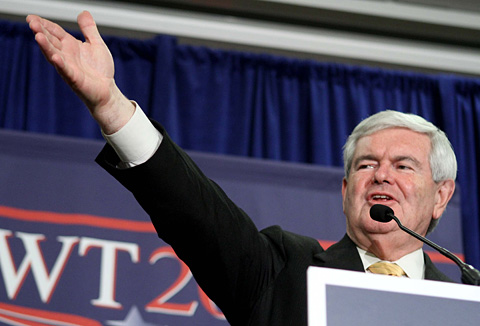 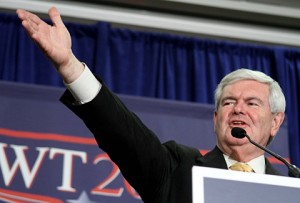 By Scott Powers, The Orlando Sentinel –

ORLANDO, Fla. — The two main Republican candidates wound up their Florida primary campaigns Monday night in Central Florida, with Mitt Romney in The Villages retirement community pushing his theme of being the best choice to beat President Barack Obama and Newt Gingrich in Orlando appealing for a late comeback fueled by the party’s disenchanted.

(PHOTO: Republican presidential candidate Newt Gingrich responds to cheering supporters during a rally in Orlando, Florida, on Monday, January 30, 2012. Gingrich had rallies on Monday in Jacksonville, Pensacola, Tampa, and Fort Myers, before heading to Orlando.)

“I want America to remain a merit society, an opportunity society where people come here seeking their own dreams and wishing to pursue them,” Romney told an enthusiastic crowd of several thousand in The Villages. “I don’t want to turn this into an entitlement nation where people think they’re entitled to what their neighbor has and government taking from some.”

Their appearances underscored the developments of a fractious, big-spending 10 days in the Sunshine State: Romney holding himself out as the “electable” candidate of the party’s establishment, and Gingrich appealing to disenchanted conservatives — especially tea party members.

The latest polls show Romney, the former Massachusetts governor making his second bid for the presidency, with an increasingly solid, double-digit lead among likely Republican voters. But the 2012 primary season has seen dramatic and often sudden voter swings.

“If there is one lesson of this campaign season, it is you never know until the votes are cast,” said Peter Freeman, one of Florida’s two Republican national committeemen.

Polls show the other two major candidates are non-factors. U.S. Rep. Ron Paul of Texas decided to skip Florida. Former U.S. Sen. Rick Santorum of Pennsylvania abruptly pulled out of the state late last week and spent much of the weekend at the bedside of his ailing 3-year-old daughter. Neither Paul nor Santorum has showed within 10 points of second-place Gingrich.

In Orange and Seminole counties, voters on Tuesday also will make choices on a handful of offices and referendums.

But it’s the Republican primary that has attracted most of the attention. At stake are all 50 of the state’s delegates as well as a powerful boost heading into February, a comparatively quiet month with just one debate. Of the seven state primaries and caucuses, Romney is strongly favored in Nevada, Colorado, Michigan and Arizona.

Florida election officials predict that as many as 2 million registered Republicans will cast votes in the race; as of Monday afternoon, at least 630,000 had already voted via absentee or early ballot, with polls showing Romney pulling down more than 40 percent of these votes.

Coming into Florida after a double-digit loss to Gingrich in the Jan. 21 South Carolina primary, Romney hammered at Gingrich in a multimillion-dollar barrage of paid advertising — including an ad replaying a 1997 clip from NBC News reporting on the reprimand Gingrich received as U.S. House speaker for violating House ethics rules — and rolled out endorsements that included two of the party’s last three presidential nominees: U.S. Sen. John McCain and former U.S. Sen. Bob Dole.

Romney went after Gingrich for his “failed leadership” and ultimate resignation as speaker in the 1990s and the $1.6 million he was paid as a Washington, D.C., consultant by the government-backed mortgage company Freddie Mac. He mocked Gingrich’s pledge to set up a manned moon base by 2012, urging one audience Monday to “Send him to the moon.”

For his part, Gingrich — in increasingly angry statements through the weekend — denounced Romney as a “Massachusetts liberal” and accused his rival of “lying” during a CNN debate last week.

Gingrich also took aim at Romney’s support from McCain and Dole, contending that Republicans made mistakes in nominating such “moderates” in 1996 and 2008, elections won by Democrats, and risked doing so again with Romney. He dismissed them as part of the Washington establishment that has “served the country badly.”

“The Washington establishment is coming unglued” over his campaign, Gingrich said in a speech in The Villages. “I am not running for president to manage the decay of the United States to the satisfaction of the establishment.”

The overriding nastiness of the campaign has some Republicans worrying that it could damage both candidates’ chances to take on Obama in the fall.

“I’m disappointed in all the negative campaigning,” Freeman said. “The overall effect is it causes confusion in the minds of the independent voters and the moderate Democrats, who will be needed (by the Republican nominee) in November.”