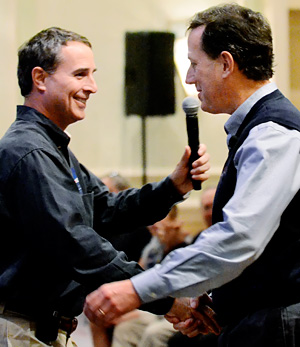 BEAUFORT, S.C. — Voters posed many questions to Rick Santorum during an event at the Beaufort Yacht & Sailing Club, where Spanish moss hung from trees and white boats bobbed on the water. But the one that made the audience sit up and listen wasn’t about health care or defense or taxes. It was about sweater vests.

“Senator, I’ve seen you on national TV,” said a man, who was not, himself, wearing a sweater vest. “And I just have to ask — how many sweater vests do you own?”

Santorum, wearing a navy blue sweater vest with his name printed on the breast, chuckled, and let the audience know they could own one just like it. Then he launched into some history, at times drawing laughter, which is sometimes in short supply at campaign events. He wore a sweater vest, he explained, to an event in Iowa in which he performed particularly well. That event, he said, was one of the events that turned around his campaign in Iowa, helping him come in just eight votes behind front-runner Mitt Romney.

People commented on his vest after the event, he said, and “it sort of took a life of its own … and the vest gave me this power.” The next day, he wore another one, he said. Though he had only brought two sweater vests to Iowa, his aides went out and bought some more. “When you’re sitting at 2 percent in the polls, any recognition is a good thing — and the vest started getting me some recognition.”

Now, the vest has its own website and Twitter account, and the Santorum website started selling embroidered vests Wednesday in exchange for a campaign donation. Santorum said his campaign has sold nearly 1,000. He plans to start selling an orange hunting vest as well — embroidered with the slogan “the right to bare arms.” Whether that was just a pun or a brilliant business plan was not readily apparent.

The rest of Santorum’s speech focused on attacking President Obama and the entitlements Santorum says Obama is showering on some parts of society.

“’When government takes control and starts picking winners and losers … taking from those who work hard and achieve and giving it to those who may not do as well, then we end up not redistributing wealth, we end up redistributing poverty,” he said, to an audience of mostly white haired residents of these islands 30 miles from Hilton Head.

Santorum was flanked by his brother Dan, who lives in Hilton Head, and is, as Santorum himself admitted, a tanner and thinner version of the one-time senator. Santorum’s wife, Karen, and three of the couple’s seven children also attended the event, although they snuck away from the broad lawn where Santorum spoke to seek food.

The song “Hail to the Chief” played from a stereo as Santorum entered the club, which had a screened-in porch and a rustic bar. In a short speech and questions he answered afterward, Santorum accused Obama of trying to hook the country on entitlements, especially on the president’s health-care bill.

“This is an election that I would not have been involved in if not for one piece of legislation: Obamacare,” he said.

Santorum has said he thinks he has the best chance to win in South Carolina, a conservative state where the candidate’s emphasis on values could play well. He patiently spent question-and-answer time explaining how he would overhaul Social Security, a touchy subject for this area, which is home to many retirees.

Jim Pennell, a military retiree who lives on Cat Island, said he planned to support  Santorum because of his pro-life position. Many other retirees seemed sold as well, clapping for Santorum as the sun started to sink in the horizon. Perhaps it was Santorum’s plan for Social Security. Perhaps it was the sweater vest.