Iowa’s offense was non-existent in the first half as Kentucky jumped out to a 7-0 lead.

Iowa gained the lead late in the game but was unable to stop a winning Kentucky touchdown drive in the final moments of the game.

LB Jack Campbell led Iowa with 14 tackles, tied for fourth most in Citrus Bowl history. Campbell had 143 tackles this season, the fifth-best single-season total in school history. The 143 tackles are the most by a Hawkeye since Pat Angerer had 145 in 2009. Campbell had five double-digit tackle performances (11, 18, 17, 16, 14) this season.

WR Arland Bruce’s 20-yard touchdown rush in the third quarter is the longest rush of his career, and the third rushing touchdown this season.

Iowa had a season-high six sacks Saturday, including two by DL Zach VanValkenburg, who finished with eight tackles and 2.5 tackles-for-loss.

Iowa’s streak of 15 straight wins against non-conference opponents was snapped Saturday. The nonconference win streak was the longest in the country. The loss was Iowa’s first nonconference loss since the 2017 Outback Bowl (Florida, 30-3).

Iowa played for a trophy for the sixth time this season. The Hawkeyes were 3-3 in trophy games this season and 25-7 in their last 32 trophy games (includes bowl games and conference championship games).

Iowa was plus-19 in turnover margin in its 10 wins and minus-seven in its four losses this season. 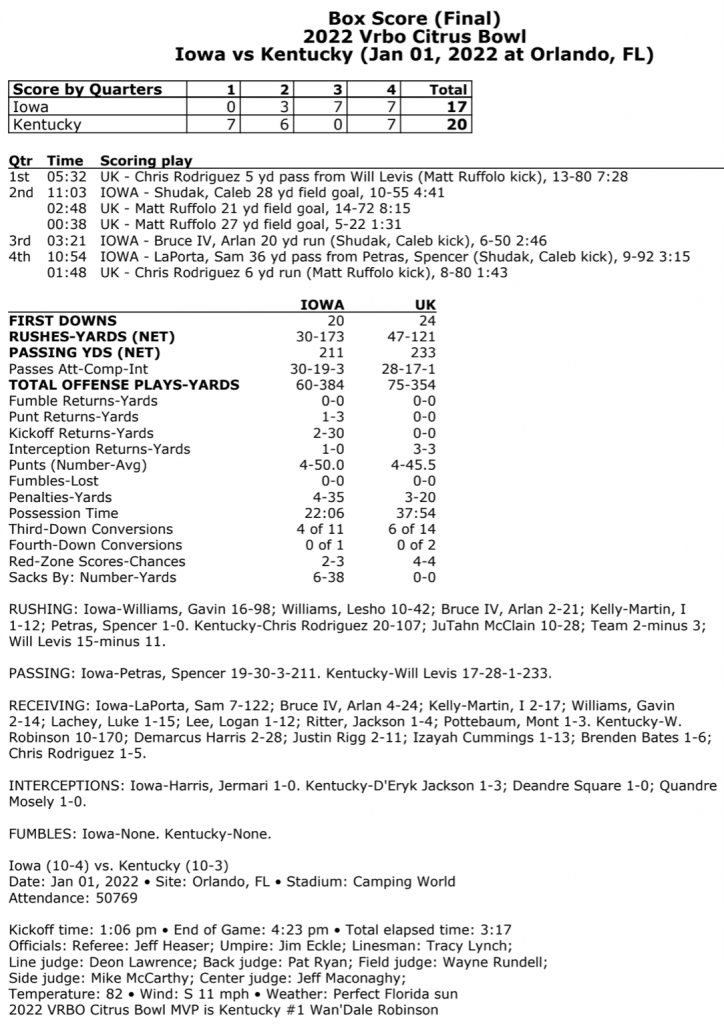