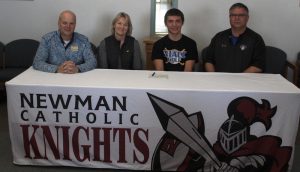 Eckenrod is the third sibling in the Eckenrod family to play golf for NIACC coach Chris Frenz. Alexandria played for the Lady Trojans in 2012-13 and Carlie played in the 2015-16 seasons.

Alexandria was a two-time national qualifier and Carlie played in the national tournament during her sophomore season.

“Three for three,” father Carl Eckenrod said to Frenz when the two greeted Wednesday afternoon before Austin signed his letter of intent.

Austin Eckenrod placed seventh at the Class 1A state tournament in Marshalltown during his sophomore and junior seasons.

“He (Austin) definitely has the competitive spirit just like all the Eckenrods have had,” Frenz said. “They all have the mindset that nothing is going to beat them – not the course, not the weather. It was great having the two sisters in the program and I’m happy to have the third Eckenrod join us.”

Eckenrod has a lofty goal this spring before joining the NIACC golf program is to win a state title.

Eckenrod also said his two sisters had nothing but good things to say about the NIACC golf program.

“They both enjoyed it,” he said. “They got to go to a lot of neat places and play on some pretty cool golf courses.”

“This gives me a good opportunity,” he said, “and hopefully in two years I can move on.”

“I’m really glad to have him,” the 12th-year coach said, “not only for his golf game but for the type of person and student he is.

“As a golfer, I love his ability to battle. His mental game is good and his golf game is good.”