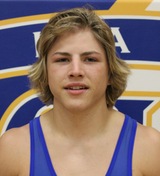 COUNCIL BLUFFS – NIACC’s Austin Anderly was the top-ranked wrestler at 141 pounds for most of the year in Intermat’s NJCAA rankings.

Heading into the national tournament, Anderly lost his No. 1 spot to Northeast Oklahoma’s Cody Karstetter and fell to No. 3 in the rankings.

On Friday night, Anderly stopped Karstetter 3-1 in the quarterfinals at the NJCAA national tournament to advance to Saturday mornings semifinals.

Anderly earned all-American honors with a fifth-place finish at 141 pounds during his freshman campaign.

NIACC’s Noah Jackson (157) and Jimsher Sidhu (285) guaranteed themselves all-American honors with a pair of wins in the consolation round on Friday night.
Jackson (13-9) picked up a 13-8 win over Shae Chafin of Labette and gained a 14-4 major decision over Harper’s Tristen Guaman.

The pin over Ledesma was Sidhu’s third of the national tournament. He pinned Rowan’s Mark Fischer in 5:38 in his opening round match and stuck Triton’s Christopher Colvin in 3:15 in his first consolation match.

On Saturday, Jackson faces North Idaho’s Thomas Stevenson in the consolation bracket at 157 and Sidhu takes on Clackamas’ Darryl Aiello.

NIACC is in 12th place heading after the first day of the tournament. Northeast Oklahoma leads with 93.5 points and Iowa Central is in second place with 86.5 points.

Iowa Western is in fourth with 62 points, Ellsworth is in fifth with 61 points and Iowa Lakes is in 13th with 34 points.