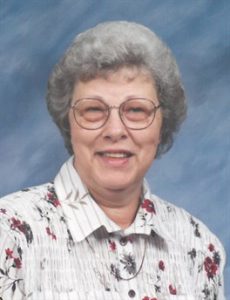 A funeral service for Carol Jones will be held at 11:00 a.m. Saturday, February 24, 2018 at the Marble Rock United Methodist Church with Pastor Dennis Burns officiating. Burial will be at 2:00 p.m. at Ingham Township Cemetery north of Hansell, Iowa.

Visitation will be at Hauser Funeral Home in Charles City from 5:00 to 7:00 p.m. Friday, February 23, 2018 and will continue one hour before the service at the church on Saturday.

Carol Lea (VerPlank) Jones was born February 25, 1938 in Greene, Iowa to Dale and May (Clark) VerPlank. She attended country school through 8th grade and graduated from Greene Public Schools in May 1956. Carol was united in marriage to Donald “Pete” Deo Jones on July 7, 1957 in Greene, Iowa.

Carol worked from home for most of her adult years by caring for her five children, tending a large garden, cooking and sewing. She also worked part-time at the Thieman Hardware Store and as a substitute cook and server at the Marble Rock School.

Carol enjoyed gardening and 4-H as a young girl and talked frequently about accompanying her mother and sisters to Des Moines to show their prize quality wares at the Iowa State Fair. Later in life she enjoyed day trips with her children and grandchildren to the Mississippi River, shopping, taking in the sites and looking at the fall leaves. Carol also enjoyed fishing trips with her children. Curt would claim he caught the biggest fish, but Carol always told a different story!

She was preceded in death by her husband, Donald “Pete” Deo Jones; her parents, Dale and May VerPlank; and brother-in-law, Bert Kampman.