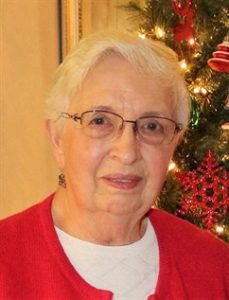 A funeral service for Lucille Malenke will be held 10:30 a.m. Wednesday, February 28, 2018 at Trinity United Methodist Church in Charles City with Pastor Jim Beranek officiating. Inurnment will be at a later date at Oak Hill Cemetery in Nashua.

Visitation will be at Hauser Funeral Home from 5:00 to 7:00 p.m. Tuesday, February 27, 2018 and will continue one hour before the service at the church on Wednesday.

Lucille Marie Malenke, the daughter of Amos and Elva (Little) Neir, was born September 25, 1938 in Floyd County, Iowa. She was educated in Charles City and graduated from Charles City High School in 1957. After high school, Lucille worked at Trowbridge Super Value as a courtesy clerk and worked her way up eventually helping with payroll. She worked at Oliver/White Farm for a short time before returning to Trowbridge Super Value. In 1959, Lucille began her 42 year working career at Salsbury Lab/Solvay Animal Health/Fort Dodge Animal Health retiring in 2001.

Lucille was united in marriage to Wesley Malenke on June 5, 1976. She enjoyed volunteering her time at the food bank in Savage, Minnesota and with the Hospital Auxiliary in Charles City. Lucille also liked flower and vegetable gardening, birds, cooking, communicating via her computer, watching television (especially the Hour of Power with Robert Schuller and The Lawrence Welk Show), being hostess to others in her home and watching sports (especially the Iowa Hawkeyes). She just really loved people in general and being outside at any opportunity possible (even tackling landscaping projects with heavy block). Lucille was a wonderful person who will be deeply missed by everyone who loved her.

Living family members include her husband of almost 42 years, Wesley of Charles City; many cousins; along with numerous other family members and very special friends.

She was preceded in death by her parents.

One Response to OBIT: Lucille Malenke, 79, of Charles City