MASON CITY – A Mason City woman was jailed after a guilty plea to assault.

Mariah Jo Berg, age 19, pled guilty to assault causing bodily injury on October 26. She had been arrested by Mason City police after an incident on the early morning of June 22.

Berg was sentenced to 90 days in jail with 88 days suspended. She was also given a year of probation and ordered to pay $1,024.25 in fines and court fees. 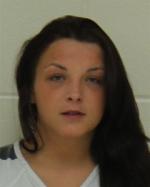