MASON CITY – The law says he can’t drive, but that didn’t stop a convicted felon drunk driver from getting behind the wheel and cruising around.

Brandon M. Anderson, age 23 of Mason City, pled guilty on November 12 to driving while barred. Anderson had lost his license after a guilty plea to third offense drunk driving and felony eluding. Anderson was sentenced to 30 days in jail, and fined $625 plus $226 in court costs.

Anderson is serving his 30 day jail sentence now and will be released on December 18. He will go back to Beje Clark upon release, where he is serving the rest of his term for previous offenses. 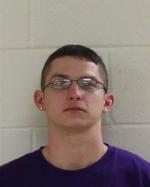