US oil boom comes with tradeoffs and an ugly underbelly 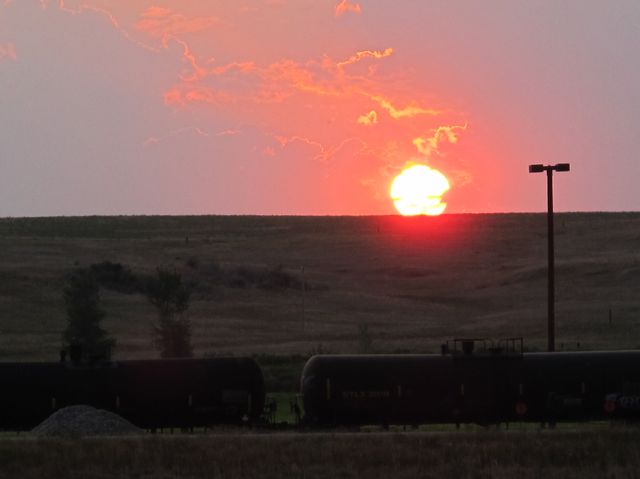 SIDNEY, Mont. — Politicians are quick to extol the virtues of domestic oil drilling while ignoring the tradeoffs. Here in this fast-developing Western oil patch, the gritty side of America’s new oil boom is on display with rising crime, a slain schoolteacher, rents that have tripled and public resources stretched thin.

That’s just the half of it. Some area high schools are at historic low attendance levels, students dropping out to work the oilfields. Menial service jobs go unfilled despite high wages, and most everyone worries that the boom is transforming small-town values into something new and unpredictable.

“It’s just happened so fast, and many small communities just didn’t have time to plan,” said Mike Coryell, executive director of the Area Economic Development Council of Miles City, Mont., a town just south of the oil boom that struggles with spillover effects. “The impacts hit, but you don’t have the resources to attack it.”

Deep below the surface of the Earth here are large quantities of crude oil trapped under rock that could make the United States less dependent on foreign oil if extracted. The Bakken formation, some 200,000 square miles of it, stretches across North Dakota, Montana, Native American reservations and parts of Canada’s Saskatchewan province.

The area saw a short-lived boom in the 1980s, but technology back then allowed only vertical drilling. Breakthroughs in horizontal drilling, known as hydraulic fracturing, or “fracking,” have unleashed a new boom that many expect to last decades.

Signs of the boom abound. Natural gas is flared in the middle of sugar-beet farms and on prairie ranches that look like the set of old TV Westerns. Just across the North Dakota line, oil rigs dot a landscape where President Theodore Roosevelt lived out his final years, and where explorers Lewis and Clark famously rendezvoused at the confluence of the Yellowstone and Missouri rivers.

“We’re glad we have an area that’s booming … but it has totally ruined the quality of life around here,” said Kerry Finsaas, 60, walking her land, which abuts an expanded rail terminal near Trenton, N.D. “I’d say life as we knew it here is gone.”

After 34 years on her land, Finsaas and her husband, Darrell, today look out the kitchen window at a natural gas flare a few hundred feet away. Crude oil is pumped into rail tank cars that stretch in front of their house almost as far as the eye can see. Nearby irrigation ditches adjacent to a new open-air disposal pond reek of sewage.

From Miles City, where Coryell struggles to keep pace with growth, it’s almost 50 miles to Sidney, Montana’s oil hub, and roughly 120 miles to Williston, N.D., the heart of the region’s oil boom. Rents have risen so high in both places that workers now commute there from, and displaced families migrate to, Miles City.

Coryell’s office is helping to secure funding for a new jail. That’s not the traditional work of economic development officials, but Miles City, like other area small towns, is burdened by rising crime. Parts of its current jail date to 1904.

“We need them to find oil in Custer County, that’s what we need,” said Coryell, referring to the revenues such a strike would bring to towns in the region. “I don’t think people understand the impacts on a rural area, the small towns that are used to having a quiet lifestyle.”

These impacts include sugar-beet farmers on tractors competing for space on tight two-lane highways with rumbling rigs that rush sand, water and heavy machinery to drill sites. Drunken driving arrests are way up, and police report seizures of uncommon illicit drugs.

“Heroin is starting to come back. The drug activity has really changed in this region,” said Doug Colombik, the Miles City police chief.

Cops on the beat feel a difference, too.

“The level of aggression that we’re met with when we’re responding (to a call) has really increased,” Mark Kraft, 33, a night officer for the Sidney Police Department, said during ride-along with a McClatchy reporter. “It makes our job a little more dangerous than it was a couple of years ago.”

The big wakeup call came in early January, when schoolteacher Sherry Arnold went for a morning jog in Sidney and never returned.

Her remains were found months later across the state line near Williston. Police said the 43-year-old cancer survivor was kidnapped and killed. Two Colorado men who came to the area in search of work in the oilfields are charged in her death.

Arnold’s slaying brought soul-searching over the costs of a transformative oil boom.

Almost to a person, everyone interviewed in the region complained they no longer recognize people in the grocery store, and that they now must lock their doors. A large town here is home to fewer than 6,000 people, and leaving doors unlocked and keys in the car is the very definition of small-town life.

“I think whenever you don’t know people, you become suspicious of them. You just have to remember that not all strangers are bad,” said Maj. Robert Burnison, Sidney’s assistant police chief. “I tell people that, and to be aware of their surroundings … just be cautious. You don’t have to be afraid.”

Burnison recently counted 17 out-of-state license plates in the local grocer’s parking lot. This flood of new American workers, dubbed “patch rats” by locals, is also clogging up the criminal justice system in eastern Montana, he and others said.

“We average about a DUI a day now,” said Judge Gregory P. Mohr, a city judge in Sidney, whose office is strained by mounting demands and no comparable increase in revenues. “All of the oil money goes west (to the state capital), but we need it here.”

Montana has a “three strikes” policy, meaning a fourth drunken driving arrest is treated as a felony charge and conviction results in a 13-month prison sentence. Many of the arrested have strikes in other states, and Montana’s policy counts them.

“We’re up in felonies all over the place here. What we’re seeing is a lot of out-of-state (resident) felonies. These are extraordinarily taxing to our system,” said Sheila M. Newman, the deputy public defender in Miles City, who now spends much of her time researching the laws of other states. “I’d like to have another full-time employee, but the legislature says the public defender system is maxed out.”

While most oil workers have clean records, some arrive with outstanding arrest warrants. And others are criminals taking advantage of laws that allow extradition only from contiguous states. Authorities in Montana get stuck with criminals who have arrest warrants but cannot be extradited.

It all explains concern that eastern Montana will inevitably resemble Williston, which looks like a chaotic oilfield staging center, and earlier this year was named by the Census Bureau as the fastest-growing micro area of the nation between April 2010 and July 2011. Roadside businesses tied to the industry dot both sides of the highway for seven miles out of town. Williston is home to exploding crime, and police think that the Hells Angels motorcycle gang now distributes drugs in the region.

“It is not if it comes here, but when,” said Al Homme, a city judge in Miles City, who predicts a 15-year boom accompanied by many of Williston’s problems.

Oil workers are young men paid handsome sums. There’s little to do in small rural towns with those sums but frivol it away on alcohol and electronic casinos. Some workers dispose of their earnings at Whispers, one of Williston’s two seedy strip bars.

There, young men slug down liquor, drop loud F-bombs and jostle over billiards. Some disappear with dancers into rooms guarded by burly, tattooed, pierced men who work in the club.

Perhaps the men are getting a lap dance, perhaps it’s something more. Locals claim prostitutes from Las Vegas come out for the weekend and go home with $5,000 in earnings. At Whispers, there seem to be two distinct kinds of women pole dancing — hard-looking older women, presumably locals, and tall, slender young women who resemble showgirls.

For many workers coming to the Bakken region, they quickly find they can’t afford to live here.

“The city is being terribly saturated with individuals looking for work,” said Cal Westerhof, a missionary from Dallas whose Fellowship Baptist Church in Sidney offers free showers, food donations and low-cost rentals for displaced workers.

Rents have more than doubled all over the oil region. People rent out basements, rooms and even their front yards for trailers. Makeshift RV parks have cropped up everywhere and charge $400 a week or more. That’s about what an apartment rented for monthly before the boom began.

“Even with a good-paying job, how do you afford to pay the rent? Groceries have gone horribly high … living on a daily basis here is high,” said Candy Markwald, who helps run the Richland County Food Bank in Sidney.

For Brant Powell, 23, rent isn’t an option. He came up from Bozeman earlier this year and landed a job driving a truck that hauls sand used in the oil drilling process. He’s forced to live in his truck, unable to afford the high rent.

“It sucks,” he said with a laugh when asked what it’s like to live out of a truck cab.

In between attempts to woo a barmaid at the Cattle-Ac, known to Sidney police for its oil-worker brawls, Powell scarfed down dinner and admitted that he’s had about enough of the oil patch.

“It’s just rough. You don’t know anybody here; you don’t feel at home,” he said. “It’s dirty. But people do a lot for money.”

Apartments and condos are under rush construction on the outskirts of Sidney, but they’ll rent for $2,000 a month and upward, a price tag for supervisors and managers. It means workers like Powell coming to the oil patch are likely to keep improvising.

“Holy smokes, if you want it bad enough, you’ll find a ranch, a basement, a backyard,” said Wally Jungels, a roofer from Miles City whose company paid for three workers to share a small trailer next to Sidney’s Pizza Hut. “If you’re not making $15 an hour, you can’t live here.”