Wildfire near freeway ties up traffic on Los Angeles’ Westside 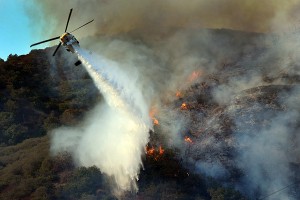 A helicopter executes a drop on a fast-moving fire along the 405 Freeway in Los Angeles, California’s Sepulveda Pass on Friday, September 14, 2012.

LOS ANGELES—A fast-moving brush fire in the Sepulveda Pass in Los Angeles’ San Fernando Valley that snarled traffic across the Westside and sent jitters through Bel-Air canyon neighborhoods burned through the night Friday, forcing crews to prepare for a second day of battle in record-breaking heat.

The Getty fire started in high brush on the east side of the 405 Freeway near Getty Center Drive during afternoon rush-hour and raced through 70 acres of hillside scrub toward the canyons of Bel-Air. It prompted the voluntary evacuation of the Getty Center, and brought an already-congested traffic corridor to a standstill.

Sepulveda Boulevard was closed between the 10 and 101 freeways, and plumes of acrid, brown smoke that could be seen as far away as Santa Monica forced the evacuation of a Boy Scout camp in the Pacific Palisades.

Water-dropping aircraft, bulldozers and about 275 firefighters battled the blaze into the night. Crews hiked up ridgelines and used hand tools to cut a fire barrier parallel to Sepulveda. The efforts had the fire 40 percent contained before operations were suspended for the night.

About 150 firefighters remained on guard through the night. Engine crews remained stationed in some of Los Angeles’ toniest neighborhoods, including the end of a cul-de-sac where mansions meet hillside scrub.

About 8 p.m., Los Angeles Fire Department Capt. Tim Ernst, the incident commander, said the fire appeared to be laying down for the night.

But, he said, “the minute it gets warm again, we’re going to see this thing flare up again.”

Crews were set to resume the attack at first light, paying particular attention to Hoag Canyon, a portion of the Santa Monica Mountains wilderness of concern, he said, because it hadn’t burned since the devastating 1961 Bel-Air fire.

The National Weather Service warned that the Southland faced a heightened risk of wildfires through the weekend because of the high temperatures.

Forecasters said humidity levels would remain very dry through Saturday, particularly in the foothills and mountains, and the region would swelter with highs of up to 104 in the San Gabriel Valley, 105 in the San Fernando Valley and 107 in the Hollywood Hills.

On Friday, temperatures hit 100 degrees downtown, toppling a 118-year-old record, and registered 102 in the fire zone.

The fire risk is particularly high in the Angeles National Forest, the Santa Monica Mountains and the Ventura County Mountains, forecasters said. But the good news is that the winds were expected to remain mild.

Both elements affect how fires burn and how they are fought, said LAFD Deputy Chief Mario Rueda.

“The heat won’t be working in our favor, but the lack of wind will,” Rueda said.

The Getty Fire was one of three in Los Angeles on Friday; the other two were minor. All were unrelated.

“This is just the start of what we anticipate being a very busy fire season,” said LAFD Capt. Jamie Moore.

The fire vexed the Westside.

Westside traffic, already hobbled by the Mulholland Bridge project over the 405 Freeway and other repairs, was even worse than usual.

Chris J. Miller, 25, a security guard working at a construction site next to a gas station near Sepulveda Boulevard and Moraga Drive, consoled trapped, flustered commuters seeking an escape.

“Oh, it’s been jam packed,” Miller said as he pointed toward Sepulveda Boulevard. “People are hungry, man. This guy came over and stopped to get food, cause he’d been stuck in traffic for two hours.”