DES MOINES – An Iowa police officer earlier arrested after picking up a teen this month and taking her to his house to commit lewd and dangerous acts faces more charges after it was released he did some really nasty things to her at his place of employment.

The Iowa DCI announced it has filed four additional criminal charges in Marion County against Alec Veatch, a former Pleasantville, Iowa police officer. According to the criminal complaint:

On the 12th of November 2021, Alec Veatch, a 24 year old adult, was working as a Police Officer in Pleasantville, Iowa. During the evening of November 11, 2021 Veatch had a 15 year old minor, E.L, in his patrol car as a ride along. E.L. was with Veatch for his entire shift that ended around 12:00 am. At the end of his shift Veatch returned E.L. home. Between 12:30 am and 1:30 am Veatch had contact with the minor E.L. via telephone and text message. Veatch and E.L. discussed a plan that would allow E.L to leave E.L’s house and meet up with Veatch so they could spend more time together. Veatch concocted and fabricated a story concerning a need to see E.L reference an official police matter. Veatch contacted E.L.’s mother under false pretense and told her he need to pick the minor back up in order to complete a witness statement reference an event E.L. witnessed earlier in the night during the ride along. Veatch returned to the minor’s home between 1:30 am and 2:00 am on November 12th and picked E.L. up in a patrol car. Veatch was off duty at this time. Veatch then drove E.L.to the Pleasantville Police Department where he remained with the minor until the early hours of the morning of November 12th. While at the Police station Veatch and the minor had inappropriate contact. The contact was sexual in nature. Veatch was observed on video from inside the Police Department kissing the minor and fondling the minor’s buttocks, over the minor’s clothing, in a sexual manner. Additionally Veatch was seen on video placing E.L in a “sleeper hold” causing the minor to momentarily pass out. This affiant knows from his training and experience that placing someone in a “sleeper hold” is dangerous and can cause serious injury due the lack of blood flow to the brain and air to the lungs. Veatch was aware that E.L. was 15 years of age at the time of the incident. On November 12, 2021 Alec Veatch was interviewed by the Iowa DCI and admitted that he was in a romantic relationship with the minor and had lied to the minor’s mother in order to see the minor again. Additionally during this interview Veatch admitted to touching the minor’s buttocks, for sexual purposes.

Veatch is being held in the Mahaska County Jail. His original arrest information can be found here. 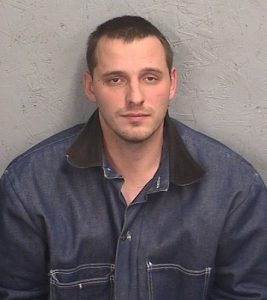