PELLA, IOWA – An Iowa mom allegedly left her 13-month-old baby in a bathtub for over 30 minutes and the child drowned, and now the woman is behind bar facing a felony.

After concluding a six week investigation, on August 5, 2016, law enforcement authorities placed Anna Sothman of Pella under arrest charging her with Child Endangerment Causing Death, a class B felony under Iowa Code 726.6A (726.6(4)). The criminal charge stems from the death of Elaine Sothman of Pella, the daughter of the accused. The decedent, a 13-month-old child, was under the care of her mother, Anna Sothman, at the time of the incident.

The facts of the case are as follows:

On June 20, 2016, the Pella Police Department received a 911 call of an unresponsive child at a Lincoln Street residence in Pella. Pella police officers and Pella Community Ambulance personnel arrived on scene and immediately determined that Elaine Sothman was unresponsive, and began lifesaving procedures. Shortly thereafter, Elaine Sothman was transported to Pella Regional Health Center by Pella Community Ambulance, then transferred by Life Flight to the Pediatric Intensive Care Unit at Blank Children’s Hospital in Des Moines.

On June 23, 2016, at 9:46 AM, hours Elaine Sothman passed away at Blank Children’s Hospital. Her death was later attributed to fresh water drowning by the Polk County Medical Examiner’s Office.

Criminal investigators from the Pella Police Department and the Iowa Department of Public Safety’s (DPS) Iowa Division of Criminal Investigation (DCI) determined that on June 20, Anna Sothman placed her daughter, Elaine Sothman, into a bathtub of running water and left her unsupervised for more than 30 minutes. Upon Anna’s return, she found Elaine unresponsive in the water. Investigators determined that Anna Sothman’s leaving Elaine Sothman unsupervised in a tub of water for an extended period of time created substantial risk to Elaine Sothman’s health, and deprived Elaine Sothman of the necessary supervision appropriate for a 13-month-old child.

After consultation between the Marion County Attorney’s Office and investigators it was determined that criminal charges against Anna Sothman were appropriate in this case.

On August 5, 2016, Anna Sothman entered a plea of guilty in Marion County Court to Child Endangerment Causing Death. Anna Sothman was transported to the Marion County Jail where she was held on no bond. A sentencing hearing will follow. 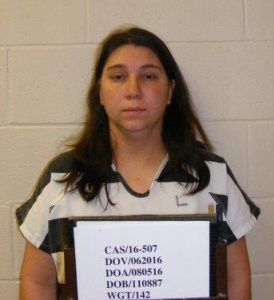