The Charles City Police Department reported that at about 5:55 AM Thursday morning, August 4, the officers served a search warrant at a residence in the 900 block of E Street with the Iowa State Patrol Tactical team and agents from the Division of Narcotics Enforcement doing the entry into the unspecified house.

At the scene, officers did arrest Nathaniel Klemesrud, age 46 of Charles City, who had been wanted since July 5 on an unrelated arrest warrant connected to a drug possession case in which he received a deferred judgement in January (probation). He is being held in the county jail at this time, awaiting a September 20 court date on possibly revoking his probation.

Police say that “many narcotics related items were seized during the subsequent search” of the house and charges are pending as a result of this law enforcement action. 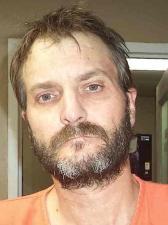