This news story was published on September 5, 2014.
Advertise on NIT • Subscribe to NIT

BRITT – A man with an extremely long criminal history who recently accepted a plea deal on a load of crimes was recently picked up in Britt for felony eluding and in Mason City on suspicion of an alcohol violation.

On July 30, Dustin Snowbird was caught by Britt police after a pursuit and charged with felony eluding, drunk driving and operating without a license. He soon posted bond and was released from jail pending an arraignment on August 26, which he skipped. A warrant was issued for his arrest.

Three days later, on August 29, Mason City police were called to 440 Indianhead Drive for a suspicious person and arrested Snowbird on the warrant. Snowbird was eventually transported to Hancock county and he soon posted a $6,000 cash bond and was released as he awaits a court date.

Rencently, Snowbird agreed to a plea deal on crimes of felony second degree criminal mischief, felony drug possession, third or subsequent offense public intoxication, felony criminal mischief, assault on persons causing bodily injury and harassment. He was sentenced to 18 years in prison and assessed nearly $50,000 in fines and court costs and has paid nearly all of that sum off. Snowbird has appealed his sentence after the verdict was handed down and was out of jail awaiting that appeal when he was in Britt for his latest arrest.

Snowbird has been arrested this year numerous times. A downtown Mason City bartender told NIT that Snowbird comes in frequently, sits down at the bar by himself and orders shots of wild turkey. “He plays on his phone, and talks to himself, which usually leads to a heated argument. We have a three drink maximum for him. When we cut him off, he gets really mad.” 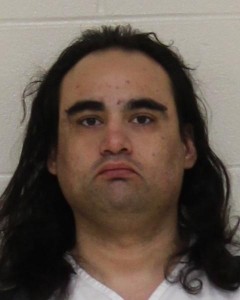