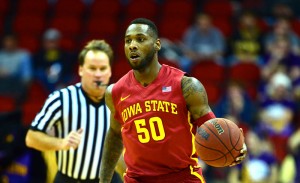 AMES – Iowa State senior guard DeAndre Kane has been named to the Wooden Award Midseason Top 25, announced today on ESPN SportsCenter and ESPN.com. Chosen by the Wooden Award Advisory Board, the list is comprised of 25 student-athletes who are the front-runners for the sport’s most prestigious individual honor based on their play so far this season. ESPNU will follow up at 5 p.m. CST with a half-hour show focusing on the candidates.

Players not named to the midseason list are still eligible for the ballot.

Kane has been a stat-sheet stuffer in his first season at Iowa State, averaging 16.7 points, 7.2 rebounds and 5.8 assists. In conference play, Kane is leading the Big 12 with 20.8 points per game and 3.0 steals, while also ranking second in assists (5.2).

The Pittsburgh, Pa. native has scored in double figures 15 times this season, including one of the season’s best performances against Baylor. In that game, Kane helped the Cyclones defeat the nationally-ranked Bears by scoring 30 points to go along with nine assists, eight rebounds and five steals.

He has posted five double-doubles this season.