Jada Buckley named Freshman of the Week for second time 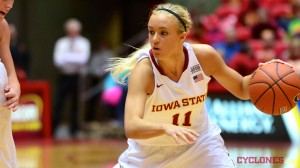 IRVING, Texas – Iowa State women’s basketball freshman Jadda Buckley was named Phillips 66 Big 12 Freshman of the Week for the for the second time this season, the league announced Monday.

Buckley posted back-to-back double-digit scoring games with a 12-point performance against Holy Cross and a 19-point effort against William & Mary in helping Iowa State to another Cyclone Challenge Championship.

The rookie knocked down a career-high four three’s against Holy Cross. She followed that with a near perfect performance against the Tribe going 5-of-6 from the field, 3-of-4 from long range and 6-of-6 from the charity stripe with no turnovers. On the weekend, Buckley shot 69.2 percent (9-of-13) from the field and 70 percent from long (7-of-10), leading Iowa State to its third undefeated non-conference schedule in school history.