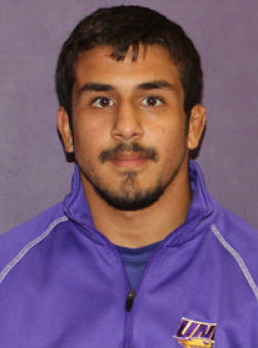 Colon, who wrestled for Clear Lake, dominated the championship match, pinning No. 2 Tony Ramos of Iowa in 2 minutes, 37 seconds. Colon is the only wrestler to pin Ramos in his college career.

“He beat three highly ranked guys. He showed he could find a way to win. He needs to build on it,” said head coach Doug Schwab. “He’s going to have to do that at the national tournament. He was the same tonight as he always is. He just wants to go and wrestle guys and attack his opponent.”

Colon struck first with a takedown early in the match, but he wasn’t able to keep Ramos down. Ramos earned an escape about midway through the first. However, Colon countered with a takedown that put Ramos directly to his back, giving him the fall.

Colon is UNI’s highest finisher at the prestigious competition since Nick Baima won the 165-pound weight class in 2005.

Dylan Peters earned two falls early in the second day of competition to become the team leader in pins – 12 total – and keep his chances alive for a third-place finish in the 133-pound weight class. However, top-ranked Jesse Delgado of Illinois stood in his way.

Delgado got a takedown early, but Peters earned an escape and reversal to close the gap, 4-3. Delgado got an escape to extend his lead 5-3 after the first period. An early escape in the second period put Delgado ahead 6-3. Peters escaped in the third to keep Delgado within two points. Despite earning a point for stalling, Peters eventually fell 6-5 to Delgado.

“Peters is close with all the top guys in the country,” said Schwab. “There are just some small finishing touches. He isn’t happy with where he is at. We get a great effort from him every time. We just have some small things to tweak.”

“He wrestled really well,” said Schwab. “He was aggressive, and he attacked. It was like a flip that switched. He’s been wrestling well all season, but there was a different look in his eye. We have to keep him with that attitude.”

Moore fell to 165-pound top seed Steven Monk of North Dakota State to start the second day of competition. Moore beat Monk early in the season to earn his national ranking, but Monk has won by decision in their last two meetings. Moore’s loss to No. 13 Pierce Harger of Northwestern bumped him out of contention for third.

“It’s a mixed bag anything you have a tournament,” said Schwab. “We need to have more guys go out and lay it on the line. Colon is laying it on the line. He is ready to go toe to toe with anyone.

“We have to dig in and put more in. It has to burn you. It’s only January, but the clock is ticking, and we have to make some gain. But we have some guys we can rally around, too.”