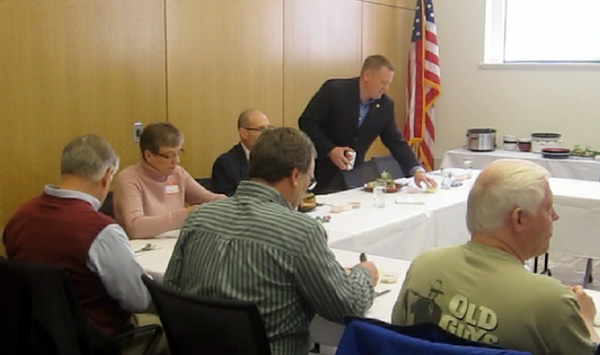 MASON CITY – In what is turning out to be a case of “where there’s smoke, there’s fire” NorthIowaToday.com has learned that Mayor Eric Bookmeyer used City Hall resources to help hold a so-called “private” meeting called a “mayors luncheon” at the Mason City Public Library on March 26th.

NIT readers will recall that Bookmeyer and City Administrator Brent Trout forced the media to leave the “mayors luncheon” and called it a “private” meeting.  When NIT Publisher Matt Marquardt refused to leave, Trout called police.

Details emerged on Wednesday straight from Mayor Bookmeyer himself, after Marquardt sent a series of probing questions to Bookmeyer, Trout and other officials inquiring about where invitations for the meeting were purchased and by whom, postage to mail the invitations, and who physically mailed the invitations.

Bookmeyer, in an extremely rare response to NIT, said this:

“The invitations came out of the credenza in the Mayor’s Office and had been in there for an indefinite period of time before I held this office. The deputy clerk physically dropped the invitations in the mailbox and the City of Mason City paid for the postage, amounting to $6.44.”

NorthIowaToday.com reported last week that City Hall staff also set up the reserved meeting room for the “mayors luncheon” while Bookmeyer commanded a city employee, Trout, to advance upon Marquardt and physically block him from doing his job.

Trout continued to defend Bookmeyer’s use of City Hall staff and resources for what he has called a “private” meeting yesterday, even dragging the good name of a former City Council member into the fray.

“It is not uncommon to have information/correspondence sent by the Deputy Clerk for the Mayor or City Council members,” Trout said. “She is considered their administrative support. In the past for example Don Nelson when a councilmember and others often had correspondence sent to people with the use of City postage and envelopes. It is considered an authorized use of time by the Deputy Clerk.”

Bookmeyer, Trout, and their media outlet the Globe Gazette have routinely taken shots at the former council.  To date, the Globe Gazette has never reported on this “mayors luncheon” nor this series of events as it continues to unfold despite the fact that the State Ombudsman Office and other agencies are actively investigating at this time.

NIT will continue to investigate and report the truth at City Hall, the Courthouse and the School Board.  Much more to come on this developing story.