Local Publisher has a Message for Black Friday Shoppers 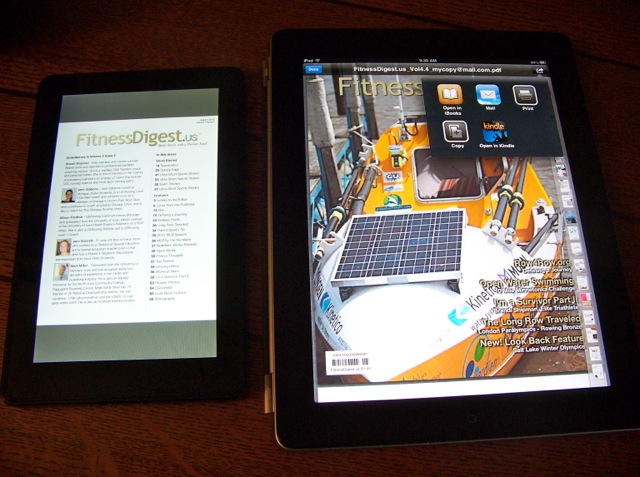 MASON CITY – One of hottest items this holiday season is going to be the iPad and the tablet PC. The local publisher of FitnessDigest.us wants to do something for these new tablet owners. Mark Miller, the publisher of the digital edition magazine FitnessDigest.us is offering a free-back issue to new iPad, Kindle and other tablet PC owners.

That could mean a lot of business.

It’s projected that 500 million tablet computers will be sold by 2015. That number has doubled every quarter and is creating a $1 billion market. FitnessDigest.us is produced locally, but it is locked in nationally now. The magazine has been growing it’s grassroots for two years. The company is 100% ready for a new wave of customers and it’s fully capable of delivering. New tablet owners can subscribe to a paid-list that gets them the most current edition or the free back-issue list that gets them the most current back-issue. It’s very easy to subscribe and there is nothing to do after sign-up. The magazine is personally addressed and delivered, in private, to their email or Facebook. The delivery system is secure and reliable. When we asked Miller about put up FitnessDigest.us as a blog he said, “The bottom line is, it doesn’t matter how your content is delivered. Consumers can get content from a blog, a pay-wall news site, email newsletter or in an eBook format. Some people fall in love with the technology while others put value on the content.” FitnessDigest.us seems to be focused on content and reliability. The magazine is delivered to tablet owners in a format that is a recognized standard. It can be stored and read on any tablet PC, computer or eReader.

FitnessDigest.us, or ’US for short, has featured writing from world famous and nationally know writers. It has featured stories from an US Olympic Hall of Fame member, multiple world record holders, established magazine writers, the London Paralympics, a best selling Amazon book author and nationally recognized race directors. The magazine is also picking up advertisers that are creating national brand names. Mr. Miller said, “One of the companies we work with is currently endorsed by Michael Phelps, being a swimmer I find that really cool.” The magazine is a perfect fit and the new tablet PCs create the perfect storm. eBooks and digital-edition magazines like FitnessDigest.us seem to be in the center of it all. Mr. Miller went on to say, “I think everyone connected to the magazine is winning. Our business partners know how to get a hold of ‘US when they need to get out a message.”

Mr. Miller’s background in the newspaper industry and a NIACC Pappajohn FastTrac™ helped him recognize the tablet PC tidal wave back in 2010. His accomplishments in ultra-distance running and swimming have provided a way to take advantage of it, in the fitness arena.

Locally the magazine is a small operation but the teamwork is growing stronger. The magazine has local business connections that create a diverse network. Along with some local writers, the company regularly works with the people at the NIACC Pappajohn Center and Matt Marquardt, the publisher of North Iowa Today. Mr. Miller stated, “some people in the community are getting really excited about the possibilities and that creates a lot of work.” One of long term goals for that magazine is to localize a workforce. In the short term we are focused on Black Friday. The company would like to see a copy of FitnessDigest.us on every tablet sold.”