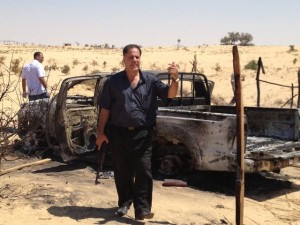 AL JORA, Egypt — Egyptian police and soldiers on Sunday killed six people here suspected of participating a week ago in the deadliest attack on Egyptian troops since the 1973 war with Israel. It was the first confirmed strike by authorities in an offensive designed to end the pervasive lawlessness that rules in the Sinai Peninsula near the border with Israel.

(PHOTO: Egyptian Gen. Mohammed Khalid, head of civil investigations, gestures in front a charred truck suspected of being used in an attack a week ago that killed 16 Egyptian soldiers. Khalid was photographed Sunday, August 12, 2012, in Al Jora, Egypt.)

The attack began at 8 a.m. when police and army troops stormed a makeshift straw shelter here that sat in the middle of desert, a few miles from where a battalion of U.S. troops are based as part of the Multinational Force and Observers that was created as part of the Egyptian-Israeli peace agreement. Three of the dead were inside the shelter and were burned beyond recognition. Three other were shot as they attempted to flee, Egyptian officials said.

Inside what remained of the lean-to, officials found religious books, rocket-propelled grenades, machine guns, clips for ammunition, chemicals and bloodied shirts. Outside was a Toyota truck that officials suspect was used in the attack Aug. 5 that killed 16 Egyptian soldiers.

Security always has been fragile here, but it all but collapsed with the end of former Egyptian President Hosni Mubarak’s regime 18 months ago. With an estimated 50 percent of the population living in poverty, smuggling — of arms, fighters and supplies — to the Gaza Strip has been the economic bulwark.

The brazen attack against the Egyptian troops, which came as they were breaking their Ramadan fast, outraged the Egyptian public and triggered demands for the government to reassert its authority in the region. The assault also alarmed Israeli officials. After killing the Egyptian soldiers, the militants stormed through a checkpoint and crossed into Israel in two captured armored vehicles. The Israelis destroyed one of the vehicles, and the other blew up on its own.

Since then, a caravan of Egyptian armored personnel carriers, trucks, fuel tanks and tanks has made its way here in a military buildup not seen since the 1973 war. Residents say, however, that the government has yet to establish its authority, and it is unclear what inroads the new push has made in eliminating bands of militants.

Egyptian officials have not identified an organization as responsible for the Aug. 5 attack, and local authorities dispute a claim made Wednesday that 20 militants had been killed in an air strike. Indeed, there were no funerals held here in the wake of the purported strike.

There could be no doubt about what took place Sunday in what appeared to be a strike against religious militants.

Gen. Mohammed Khalid, the head of criminal investigations in northern Sinai, told McClatchy Newspapers that it was a “big possibility” that those killed Sunday were participants in the Aug. 5 attack. Five hours after the assault on the lean-to, police pickup trucks and personnel carriers, followed by Army tanks, converged on the site to collect evidence.

Local residents had already gathered at the scene, where two charred bodies were covered by what apparently was fabric that had been used to help construct the lean-to. Many were taking souvenirs when a tank charged at them through the desert and police officers began shooting in the air. The police grabbed the residents and threw them to the ground before clearing the area and starting their investigation.