As protesters rally, Amazon.com says it will improve warehouse conditions 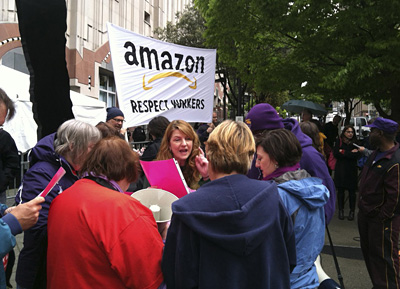 SEATTLE — Amazon.com Inc., addressing issues that have drawn heavy criticism of the company, told shareholders Thursday that it planned to improve warehouse conditions and drop its membership in a conservative public-policy organization.

More than 100 protesters rallied outside the company’s annual shareholders meeting Thursday at the Seattle Art Museum, calling on the Seattle Internet retailer to pay more taxes, treat its workers better and drop its membership in the American Legislative Exchange Council.

(PHOTO: Protestors gather in front of the Seattle Art Museum in Washington to protest where Amazon’s shareholders meeting will be held Thursday morning, May 24, 2012.)

During the meeting, Amazon founder and Chief Executive Jeff Bezos said the company will spend $52 million this year retrofitting its warehouses with air conditioning. Amazon has come under heavy criticism for conditions at its warehouses after a Pennsylvania newspaper revealed that employees were forced to work in temperatures above 100 degrees last summer.

In response to a shareholder’s question, general counsel Michelle Wilson said Amazon has decided not to renew its membership in the nonprofit ALEC.

“This year, we’ve decided not to renew with ALEC, and it’s because of positions they’ve taken not related to our business,” Wilson said.

Before the meeting, shareholders were ushered through metal detectors under a white tent outside the museum.

Protesters came from as far as Spokane, Wash., and Medford, Ore., to attend the rally, which was organized by Renton, Wash.-based labor group Working Washington.

“This is part of a national effort to go after some of the worst corporate tax dodgers,” said John Sellers, 45, of Vashon Island, Wash., also citing Bank of America and General Electric. “It’s the American way to dodge taxes if you’re a corporation.”

Working Washington also said it wanted the company to treat its warehouse workers with respect and end its support of ALEC, which has been in the spotlight recently for its support of “stand your ground” laws in various states, including Florida. The law is an issue in the controversy surrounding the shooting of Florida teenager Trayvon Martin.

The Amazon shareholders meeting drew about 200 people, twice as many as usual for the annual event.

Seattle police officers forcibly removed a handful of protesters at the end of the meeting after they stood in the aisles and shouted.

Bezos, on a darkened stage, then thanked the audience for coming. He left without taking questions from the media.