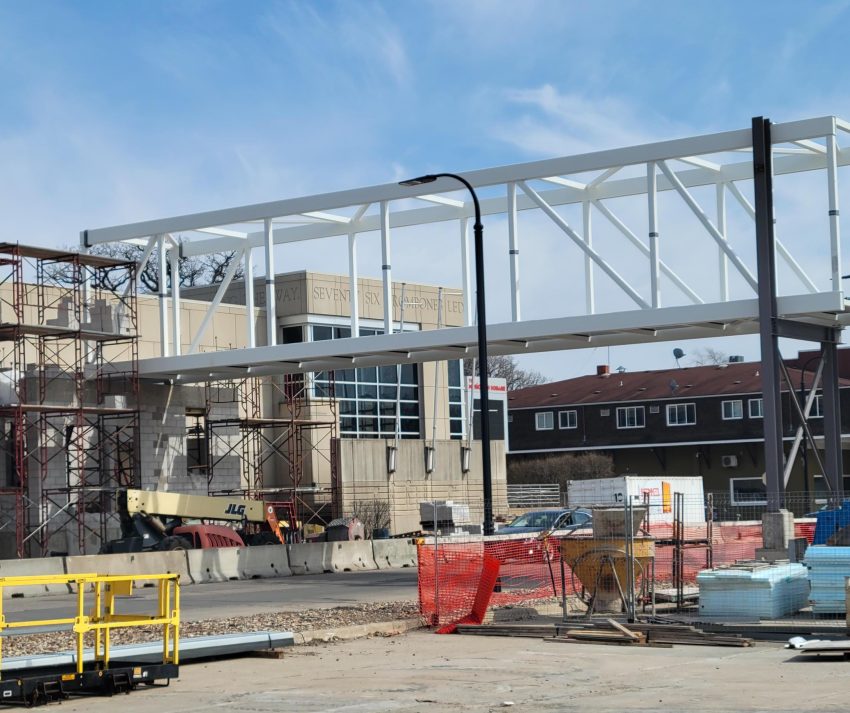 “Lookie what we were doing last night … we set the River City Renaissance Skywalk bridge across Delaware Street!” Henkel said in a social media post.

The huge white monstrosity looked to be one solid piece of metal, probably welded together.  It had recently been trucked into the Southbridge Mall parking lot where it sat until it was set in place Thursday night.  Theoretically, folks will be walking across the skywalk from a hotel that is rumored to be built in the mall parking lot, over Delaware Avenue into banquet facilities in the Music Man Square.  Officials have claimed the structure, which will cost over $1 million to build, is “impact resistant” to vandals throwing rocks at its glass windows.

The next steps will be to cut an entrance into the Music Man Square and continue to complete the skywalk.  Local officials seem optimistic that a hotel will be built in the parking lot, thereby giving the skywalkers another destination.

Mason City seems intent on putting fresh bodies in its downtown, something city forefathers apparently frowned upon when the high school and junior college were both relocated far out west of downtown, thereby robbing businesses of possible patrons.  Now, apartment complexes adjacent to the River City Renaissance district surrounding the mall are being built.  A hotel will add to the bee hive of possible activity.  It is rumored that Southbridge Mall will be transformed, too, into an outdoor shopping and entertainment complex.  Many townsfolk still don’t believe that will happen – but progress seems apparent.