Buchite, 26, was sentenced to serve 30 days in the Cerro Gordo County Jail on October 28th, 2011 by Judge James Drew and was to begin serving his sentence March 8th.

The three warrants are related to two controlled substance violations and driving while revoked.

On September 8th, 2011, Buchite was charged with 4th degree theft after a generator that he allegedly stole caused a fire that burned his house down, located at 717 South Jersey Ave.  That house has since been approved for demolition by the Mason City Council.

Buchite will stand trial for the generator theft on April 3rd of this year. 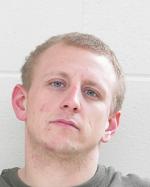 8 Responses to Mason City man taken into custody on warrants