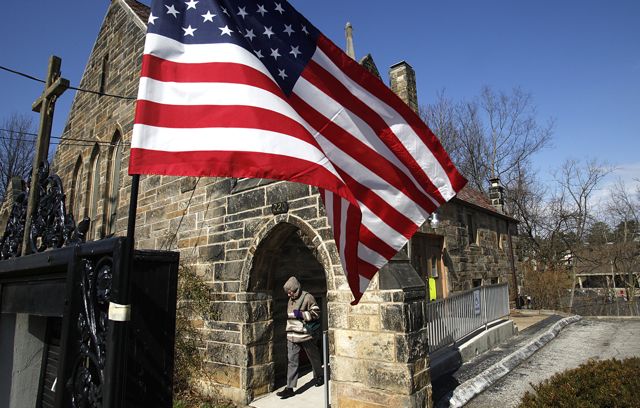 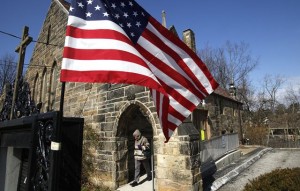 WASHINGTON — Mitt Romney won the Republican presidential primaries in Virginia, Massachusetts and Vermont on Tuesday as he fought to create an aura of inevitability, while Newt Gingrich won his former home state of Georgia.

(PHOTO:  Voter Darlene Norman exits the Glen Echo United Presbyterian Church after casting her ballot in Columbus, Ohio, on Tuesday, March 6, 2012. Voters in 10 states are at the polls amid Super Tuesday, the most delegate-rich day of the 2012 GOP presidential campaign.)

Voters in 10 states went to the polls on “Super Tuesday,” the biggest primary and caucus day of the year. Gingrich, along with Rick Santorum and Ron Paul, were fighting for badly needed momentum — and perhaps survival. Santorum won Tennessee and held an early lead in Oklahoma.

The biggest prize was Ohio, where polls said the race was a dead heat between Romney, the former Massachusetts governor, and Santorum, the former Pennsylvania senator.

Ohio matters because it’s a big state mixture of urban and rural, blue collar and high tech. And no Republican has ever won the presidency without winning the state.

A Romney win, one week after he claimed victory in neighboring Michigan, his native state, would be an important sign that he has broad appeal in crucial states. But a Santorum victory, after his close second-place showing in Michigan, would raise fresh doubts about Romney’s viability.

Gingrich, the former speaker of the House of Representatives, was hoping the Georgia victory would revitalize his almost-moribund campaign. Its 76 delegates are the day’s single-biggest state total.

Paul, the Texas congressman who has focused largely on caucus states, was hoping he could win North Dakota, Idaho and Alaska.

At stake Tuesday were 419 delegates to August’s Republican National Convention in Tampa, Fla.; 1,144 are needed to nominate.

Santorum and Gingrich started the day far behind in delegates and were expected to remain well behind Romney. But they hoped to demonstrate strength in the South, where Romney has proven less popular.

Romney’s wins in Massachusetts and Virginia, where only he and Paul qualified for the ballot, were expected. Romney also was expected to do well in North Dakota, Alaska and Idaho, where he has mounted strong efforts.

The less competitive states have 194 delegates. Ohio has 66, but Santorum may not have qualified to compete for 18 of those delegates, giving Romney a big edge.

However, Romney needed more than numbers Tuesday — he needed to demonstrate strong, broad appeal to a Republican constituency that has had qualms about his commitment to conservatism. Romney governed Massachusetts as a center-right executive, and it’s common on the campaign trail to find GOP voters still upset that he signed into law a near-universal health care requirement in his state.

Those same voters, though, are eager to see President Barack Obama defeated and often say Romney is the most electable challenger.