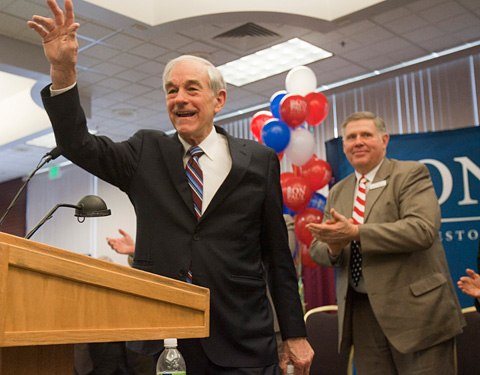 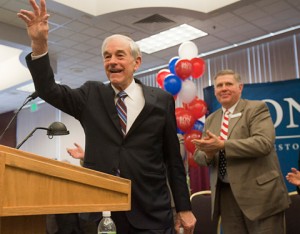 (PHOTO: Ahead of the Idaho Republican caucus, a state where poll numbers show his campaign is strongest, GOP presidential hopeful Ron Paul speaks to a noon-time crowd of about 300 at the Nampa Civic Center in Nampa, Idaho, on Tuesday, March 6, 2012.)

Romney, who also won four other states, had 38 percent of the Ohio vote to Santorum’s 37 percent with 96 percent of votes counted.

Romney’s Ohio victory firmly established the former Massachusetts governor as the candidate to beat for the 2012 GOP nomination. But Santorum, a former U.S. senator from Pennsylvania, made it clear that he has significant support.

On the biggest day of the 2012 primary and caucus season, Santorum won Tennessee, Oklahoma and North Dakota. In addition to Ohio, Romney won Virginia, Vermont, Massachusetts and Idaho.

Newt Gingrich, the former speaker of the House of Representatives, won his home state of Georgia. Alaska also held caucuses Tuesday, and Texas Rep. Ron Paul was making a strong effort there.

Romney was the clear winner in one respect: He piled up delegates to this summer’s Republican National Convention and crept closer to the 1,144 delegates needed to nominate. In all, 419 delegates were at stake Tuesday.

The biggest prize was Ohio. The state matters because it’s large and a mixture of urban and rural, blue collar and high tech. And no Republican has ever won the presidency without winning the state.

A Romney win, one week after he triumphed in neighboring Michigan, his native state, would be an important sign that he has broad appeal in crucial states. But a Santorum victory, after his close second-place showing in Michigan, would raise fresh doubts about Romney’s viability.

Gingrich was hoping the Georgia victory would revitalize his almost-moribund campaign. Its 76 delegates are the day’s single-biggest state total.

Santorum and Gingrich started the day far behind in delegates and remained well behind Romney. But they hoped to demonstrate strength in the South, where Romney has proven less popular.

Romney needed more than numbers Tuesday — he needed to demonstrate strong, broad appeal to a Republican constituency that has had qualms about his commitment to conservatism.

Romney governed Massachusetts as a center-right executive, and it’s common on the campaign trail to find GOP voters still upset that he signed into law a near-universal health care requirement in his state.

Those same voters, though, are eager to see President Barack Obama defeated and often say Romney is the most electable challenger.

Ohio was the big test.

“We have won in the West, the Midwest and the South,” he said, “and we are ready to win across the country.”

Romney addressed supporters in Boston, and drew sharp contrasts with Obama. He also talked briefly about his candidacy.

He addressed supporters in Boston before Ohio’s results were in.

“I’ve listened and I’ve learned. I hope I’m a better candidate for it. And I will be forever grateful for this greatest of experiences,” he said.

He reminded backers he’s still ahead in the delegate count, saying, “Tonight, we are counting up the delegates for the convention — and counting down the days until November.”