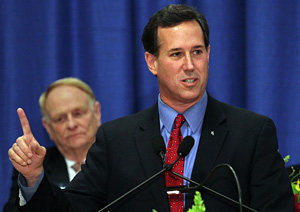 COLUMBUS, Ohio — As he bounded from one cheering throng to the next in the battleground state of Ohio, Rick Santorum roused his conservative base Saturday with ideas not often heard in mainstream American politics. His audiences — Christian conservatives, tea party activists and other right-leaning Republicans — loved it.

Speaking to the Ohio Christian Alliance, Santorum went so far as to refer to public schools as “factories” and say that federal or state support for education is an “anachronism.”

With polls showing him leading in Ohio, Santorum is trying to lock down support from Republicans who find former Massachusetts Gov. Mitt Romney too moderate and have given up on former House Speaker Newt Gingrich.

Nowhere was that more evident than at Saturday’s back-to-back appearances at a tea party gathering and at the Christian Alliance luncheon, both in Columbus.

Speaking to tea party activists, he warned that President Barack Obama was pushing the United States “to the brink of socialism, to the brink of losing our freedom,” and he brought the crowd to its feet with an impassioned call to reclaim the country. “Will you join me?” he asked, to roars of assent.

Although Obama was his main target, he also took shots at Romney, mocking him over one of the former governor’s proudest achievements.

Romney frequently touts his role in turning around the 2002 Winter Olympics in Salt Lake City after a bribery scandal threw the planning off track. But Santorum brought up the Olympics to swing back at Romney’s assertion that the former Pennsylvania senator was “a big proponent of earmarks” during his days in Congress.

He also said Romney, as governor, had encouraged the Massachusetts congressional delegation to win half a billion dollars in earmark spending for the state. “Does the word ‘hypocrisy’ come to mind?” Santorum asked.

The crowd of about 250 people, many waving Santorum signs and wearing his campaign buttons, responded gleefully. The response was more muted when Santorum defended the concept of congressional earmarks, which are used to set aside funding for specific programs in a member’s state or district. He conceded that the system had been flawed, but said that Congress had reformed it during his time in office.

“There was abuse and we stopped it. But the idea that every earmark is a bad one is false,” he said.

A Romney campaign spokeswoman, Andrea Saul, issued a statement responding to Santorum’s attack. “Sometimes when you shoot from the hip, you end up shooting yourself in the foot,” she said. “There is a pretty wide gulf between seeking money for post-9/11 security at the Olympics and seeking earmarks for polar bear exhibits at the Pittsburgh Zoo.”

Later, addressing about 600 people at the Christian Alliance, Santorum spoke extensively about the role of faith in American public life and about his opposition to abortion. He also brought up education.

Santorum often speaks about how he and his wife home-school their children. He devotes a chapter to it in his book, “It Takes a Family,” acknowledging that he is “something of a salesman for home schooling and for cyber schooling,” but conceding that it is not for everyone.

On Saturday, he went further, seeming to attack the very idea of public education.

(Aside from schools for the children of military personnel, the federal government does not really operate schools. Most U.S. schools are supported primarily by state or local funding, or a combination of the two.)

Romney, meanwhile, returned to Utah to celebrate the 10th anniversary of the Salt Lake City Olympics.

“These games will always be about the greatness of the people of this great land. They will always hold a place in my heart — and I believe your heart — that will never be erased,” Romney told thousands gathered Saturday night at a Stars on Ice celebration of the anniversary, featuring famous skaters such as gold medal winners Sarah Hughes, Jamie Sale and David Pelletier. “I love you. I love the experience we shared together.”

He shared a story he often tells on the campaign trail about speed skater Derek Parra, who after winning gold and silver medals told Romney that the most moving experience of the games was carrying into the stadium the torn, burned flag that had flown above the World Trade Center.

Earlier, Romney thanked people who worked on the games’ organizing committee at a private reception nearby.

“These were the most inspirational games I have ever seen,” he told a few hundred people gathered in a restored historic train station lobby. He called out various teams that worked on providing food, decorating the city, finding entertainment and doing other work that made the games a financial and sporting success.

“”There’s power in unity,” Romney said. “We came together as a group of people, not caring about who got credit but caring about putting on the best games in the history” of the Olympics.