NOTE: Due incorrect information supplied by KRIB the radio remotes from the surf featuring Bob Hale will not begin on Wednesday of this week. Instead they are scheduled to occur Thursday, Friday and Saturday, Noon to 3 p.m. each day from the Surf Ballroom. 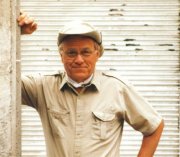 CLEAR LAKE, IA–Bob Hale is about to get his old gig back at the radio station that effectively launched his long broadcasting career.

Okay, it’s only going to be for 4 days during the Winter Dance Party event in Clear Lake, but Hale (pictured) is as enthusiastic as ever about his return to North Iowa’s airwaves.

Most fans of the annual celebration know that Hale was the Master of Ceremonies at the Surf Ballroom on a frigid night in early February of 1959 for something billed as the Winter Dance Party Tour.

It became an infamous tour after a small plane carrying Buddy Holly, J.P. (The Big Bopper) Richardson, Ritchie Valens and pilot Roger Peterson crashed north of Clear Lake only hours after the show.

Holly had chartered the plane to avoid a long, cold bus ride to the tour’s next stop in Moorhead, Minnesota.

Hale was 25-years old at the time and isn’t totally sure if he was the first person to broadcast the news of the performers deaths, but he vividly recalls being on the air at KRIB-AM the morning after the show.

He had just read a news bulletin from Des Moines about the wreckage of a small airplane found near Clear Lake.

Then the phone rang and Surf Ballroom Manager Carroll Anderson was on the other end of the line.

Hale recalls that Anderson wanted to talk to him about the bulletin and said he had just been to the crash site.

Hale, who had not made the connection yet, wondered why. Then Anderson said “the police wanted me to identify the bodies, Buddy, Ritchie and the Bopper are dead.”

Hale recalls turning on the KRIB microphone the moment he got off the phone, knocking the needle off of the record spinning on the turntable and telling his audience what Anderson had just told him.

At the same time he reached over and grabbed Buddy Holly’s album, put it on the turntable and let it play.

Following a phone-call to UPI to relay Anderson’s information, Hale called his boss, asked for extra help and predicted it was going to be a busy day.

Indeed it was, Hale found himself doing interviews for radio stations all over the country about what he had seen and experienced the night before at the Surf Ballroom.

KRIB became an on-air wake for fans of the performers.

The station played their music exclusively all day long and in-between songs, Hale and others conducted live interviews with fans who had been at the show.

Some of them included students at nearby Waldorf College.

The reward for their candor was a suspension because the Lutheran school did not approve of dancing in those days.

One of the many interviews with other radio stations that Hale did that day was for a future employer in Springfield, Illinois.

It led to a gig in Peoria and then the big-time as one of “The Swinging Seven” at WLS-AM. The station billed itself as the “bright sounds of Chicago Radio” when it switched to a Top-40 format and Hale was a part of its early success.

Hale then went to WMAQ-AM and was the voice that signed on WFLD-TV.

Sports and news anchoring assignments there got the attention of WMAQ-TV and after his second day of auditioning, Hale got the job as main anchor of “Today in Chicago,” the NBC station’s morning show.

A news anchoring stint in Lexington, Kentucky kept him busy for most of the 1980’s, but Hale’s voice has rarely taken a rest and he jokes that it is years older than him.

Now it will get a workout for the Winter Dance Party 2012.

Hale originally wanted to do the broadcast from the Barrel Drive-In on Highway 18 in Clear Lake after the current owner expressed interest in having him revive a tradition from the restaurant’s early days.

It was built in the late 1950’s with a glass booth at the top, which was a studio for radio remotes.

Hale did several there for KRIB and he says the drive-in was a nightly fixture in the summertime.

But ultimately Hale said it made more sense to do the remotes from the Surf, so he plans to take over the lounge area for 4 days beginning Wednesday February 1st.

Each day through Saturday February 4, Hale will be broadcasting live on Good Time Oldies 1490 KRIB-AM, from noon 3 p.m.

Hale is promising his version of “wing-it” radio for what is being billed as the KRIB Sock Hop at the Surf.

He is preparing by downloading and listening to the top hits of the mid to late ‘50’s.

Hale is sure to play music from the era, interview performers and folks gathered to enjoy a day and an evening of music at the Winter Dance Party.

He is already using his Facebook page to ask fans to send him their musical requests, dedications and other memories in hopes he will be able to incorporate them into the broadcasts.

“It’ll be fun because the people who come to the Surf know it, they know the Surf’s role in the music and my career moved with the music. It’ll be a big fat family get-together,” said Hale.

“Hope their feet and my voice holds out and we’ll have a great time together.”