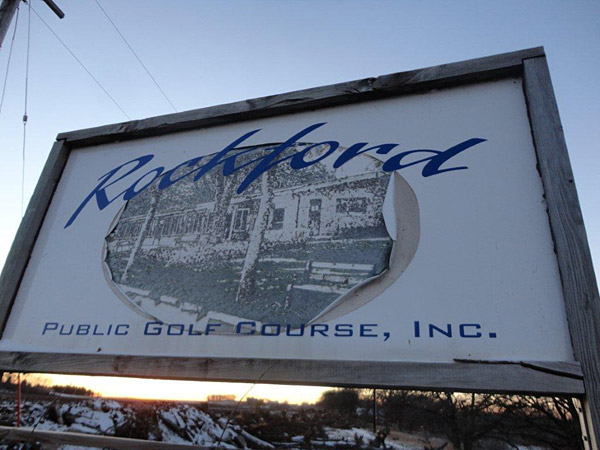 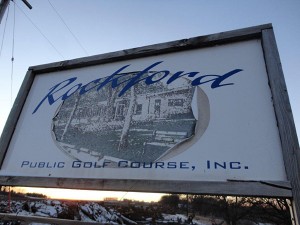 He would often play a quick nine after work before his wife got home, and was looking forward to playing more when he retires someday.

So it was more than a little hard to see the course plowed under this past fall after the owner, Jim Dow, said it wasn’t economically feasible to keep the course open.

Dow’s hoping to sell the property to someone who will be able to make it work as cropland.

But the asking price of $695,000, which is several times more than he paid for the property in 2005, has a lot of Rockford area residents teed off, feeling victimized by an opportunistic owner.

Dozens of mature trees at the former award-winning course – it was named the top nine-hole course in the state in 1997 – were cut down last fall. Concrete pavement was removed and the entire course was plowed under shortly afterward, bringing an end to a course that opened in 1964.

Some in the Rockford area thought Dow should have waited to find a buyer who would keep the course open, and have speculated that Dow turned down at least one such offer because it wasn’t high enough. 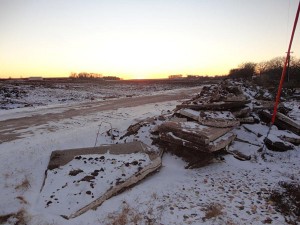 Dow said he never had an offer since listing the property for sale in June. The asking price is $695,000, according to online listing information.

Nash, a former member of the Rockford Golf and Country Club board of directors, said the board cut Dow a good deal on the price for the course because members wanted to ensure its sustainability.

“We were looking for someone who would take care of it,” he said.

However, upkeep of the course deteriorated after the sale, as did the atmosphere, Nash said. A couples tournament was dropped and many of the former members didn’t feel as welcome as they had in the past, he said.

Nash acknowledged the nonprofit board he served on was struggling to make the course profitable, and that there was some bank debt. So Dow was given “a really good deal so he could make a go of it and keep it a golf course.”

Dennis Dingel, who served as financial secretary for the nonprofit for 10 years before the course was sold, confirmed that the course “was not making enough money to survive.”

Nash doubts the ground will be very productive as cropland because it has a lot of clay and limestone.  Some in the community have said the land was used for golf because it was never good for crops. 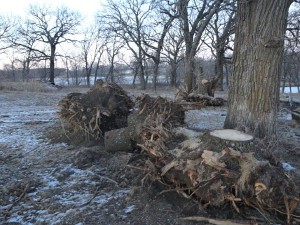 (PHOTO: Remains of trees that once framed the former award-winning course await disposal.)

Nash said he feared the course was doomed when he went to play a round in October and arrived to find someone had torn up greens and some tee boxes by “cranking donuts” on them in a vehicle.

He said he’d never heard of vandalism at the course before then.

Dow said he had an idea who was responsible, and that no one was charged in connection with the vandalism.

He said if the land doesn’t sell by spring, he’ll have to plant it himself.

Meanwhile, Nash and other avid golfers in the area will have to travel to courses in Nora Springs, Greene, Rockwell or Charles City, all of which are within about 15 miles. 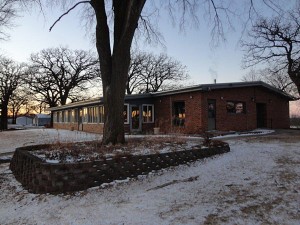 No doubt there will be some grumbling along the way.

“There are a lot of people I talked to who never even golfed there who are upset about it,” Nash said of the course’s demise.

In a day when communities are doing all they can to attract residents and visitors, it’s hard to lose such a nice amenity.

Rockford Mayor Harry White said he knows a lot of people are upset about the loss of the golf course. “But I guess, if you’re not making enough profit to cover expenses, you don’t have much choice.”

He said the city wasn’t in a position to buy the course, nor was it even suggested.

Dow said the clubhouse and farmland are listed by Jane Fischer at Century 21 Preferred and could be sold as separate properties or together.

(PHOTO: Golf enthusiasts in and around Rockford, Iowa, seen in the background, are upset that the golf course was plowed under last fall to be used as cropland.) 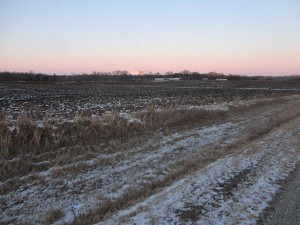