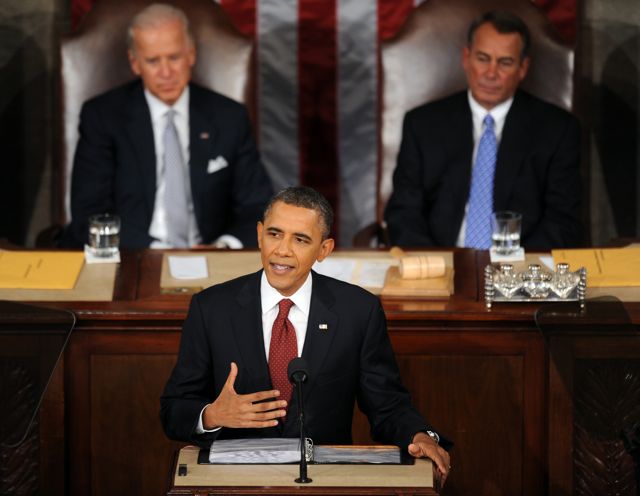 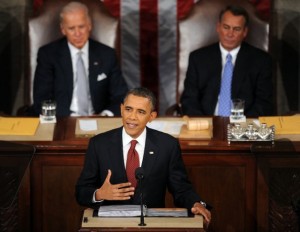 WASHINGTON — President Barack Obama used an election-year State of the Union address Tuesday night to frame the national debate not as a referendum on him but as a pivotal decision on how to save the American dream.

(PHOTO: U.S. President Barack Obama gives the State of the Union address before a joint session of Congress, Tuesday, January 24, 2012, in Washington, D.C.)

He boasted that the nation’s economy has improved, albeit slowly, from the depths of the Great Recession. “The state of our Union is getting stronger,” he said.

But he said the middle class has been losing ground for decades, and he urged a new agenda of taxes and government spending to tilt the playing field away from the rich and powerful and more toward the rest of the citizenry.

Once, he said, Americans believed “the basic American promise that if you worked hard, you could do well enough to raise a family, own a home, send your kids to college, and put a little away for retirement. The defining issue of our time is how to keep that promise alive.”

The speech fleshed out a broad vision Obama laid out in December in a speech in Osawatomie, Kan., one modeled after a 1910 speech that Theodore Roosevelt gave in the same town laying out themes for what would become the Progressive Era.

Among his proposals: a 30 percent minimum tax on millionaires, a minimum tax on companies that ship jobs overseas coupled with tax cuts for those that keep factory jobs at home, and a $200 billion, six-year plan to build roads, bridges and railways with money saved from bringing U.S. troops home from Afghanistan and Iraq.

Obama opened his speech declaring victory in bringing U.S. troops home from Iraq, eliminating Osama bin Laden, and beginning to withdraw troops from Afghanistan. That enables the country, he said, to “think about the America within our reach.”

Republicans countered with a similar vision of a more prosperous America where everyone shares the bounty. But they offered a far different agenda, and castigated Obama for policies they said have made things worse.

He said that Obama hurt the economy with over-regulation of business, a refusal to allow domestic energy production, and proposals to raise taxes on the rich that amount to dividing the country.

Obama insisted that his agenda is what’s needed to put the country back on track.

He proposed that millionaires pay a minimum tax of 30 percent, putting a precise number to the idea he proposed last year. The proposal comes as Republicans vying for his job all have proposed cutting taxes for the wealthy, arguing they are the ones who create jobs.

He boasted that manufacturing — for a century the stepping stone of upward mobility — is adding jobs again for the first time in more than a decade.

Obama spent most of the hour-plus speech on domestic issues, which dominate the public’s priority list. Late in his oration, he noted the “wave of change” sweeping across the Middle East and North Africa. Of Syria, wracked now by violent repression, he said, “I have no doubt that the Assad regime will soon discover that the force of change can’t be reversed, and that human dignity can’t be denied.”

Turning to Iran, he said the world has unified in opposition to the regime’s work toward a nuclear weapon. “Let there be no doubt,” he added: “America is determined to prevent Iran from getting a nuclear weapon, and I will take no options off the table to achieve that goal.”

Obama looked out on a Congress where Republicans control the House of Representatives and have ruled out most of his proposals, particularly tax increases for the wealthy.

“As long as I’m president, I will work with anyone in this chamber,” Obama said. “But I intend to fight obstruction with action, and I will oppose any effort to return to the very same policies that brought on this economic crisis in the first place.

“We will not go back to an economy weakened by outsourcing, bad debt and phony financial profits,” he added.

In the Republican response, Daniels rejected the criticism of his party as obstructionist.

“It’s not fair and it’s not true for the president to attack Republicans in Congress as obstacles on these questions,” he said. “They and they alone have passed bills to reduce borrowing, reform entitlements and encourage new job creation, only to be shot down nearly time and again by the president and his Democrat Senate allies.”

Daniels lamented criticism of the wealthy as not paying their “fair share,” calling it needlessly divisive.

“No feature of the Obama presidency has been sadder than its constant efforts to divide us, to curry favor with some Americans by castigating others,” said Daniels, who considered but passed on a run for the Republican presidential nomination to oppose Obama.

“As in previous moments of national danger, we Americans are all in the same boat. If we drift, quarreling and paralyzed, over a Niagara of debt, we will all suffer, regardless of income, race, gender or other category. If we fail to shift to a pro-jobs, pro-growth economic policy, there will never be enough public revenue to pay for our safety net, national security, or whatever size government we decide to have,” Daniels said.

“This White House has shown an arrogance of power and a belief that Washington knows best since the president took office three years ago,” said Sen. Orrin Hatch, R-Utah, the ranking Republican on the Senate Finance Committee.

“The American people appreciate a good speech — but they want results,” said Sen. John Barrasso of Wyoming, the Senate Republican Conference vice chair. “The president’s rhetoric sounds admirable, but his record has been awful.”

“Rather than pushing for equality of outcomes, we need to make sure that everyone has the opportunity to succeed,” Cantor said. “So, instead of talking about a fair share or spending time trying to push those at the top down, elected leaders in Washington should be trying to ensure that everyone has a fair shot and the opportunity to earn success up the ladder rather than meeting in the middle.”