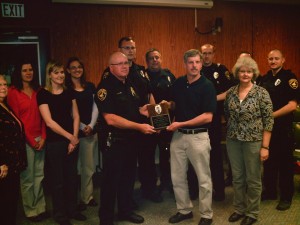 The Charles City Police Department established the Trefz Award in 1991 in honor of Council person Shelly Trefz who served on the Charles City, City Council from 1982-1991.

Police Chief Paul Scranton created the award in memory of Shelly’s genuine support of the law enforcement mission, to be awarded to individuals who have most exemplified the true spirit of cooperation to law enforcement.

The Charles City Police Department regularly enjoys a high level of cooperation from America’s Hometown and because of this, it is sometimes difficult to determine when special recognition is warranted.

Occasionally however, someone demonstrates their support of our community and the public safety mission by going far beyond what is common, even for a community such as this.

In 2009 the Charles City Police Department received funding through a grant to purchase our first K-9 to assist in the investigation of illegal drug activities. Since that time the K-9 program has mostly operated off of donations from individuals and organizations in our community to provide for the on-going cost of maintaining a police canine.

Dr. John Moellers and the Charles City Animal Clinic have supported our police canine program from the beginning by pledging to cover routine exams for Midnight, our four legged officer. Since then Dr. Moellers and the Charles City Animal Clinic have donated almost everything that has come up in Midnight’s care including vaccinations, medications, flea, tick, and heartworm preventatives, and in one case, mended a wound that Midnight sustained while chasing a cat.  Hey! If the cat wasn’t guilty, why was he running from the cop, right!

Thanks to Dr. Moellers and the Charles City Animal Clinic, Midnight not only landed a job, but he seems to have landed a job with benefits.

Dr. Moeller’s support of our city doesn’t stop there. Since 2001 Dr. Moellers has provided veterinary care at discounted rates, 24 hours a day, 7 days a week to P.A.W.S. a volunteer organization dedicated to operating the Charles City Animal Shelter. Much of his service to P.A.W.S. is donated as well, to see that the animal population of our community is looked after.

Given all that Dr. Moellers has done for our community and our animals, we at the police department believe that he and the Charles City Animal Clinic are deserving of the 2012 Trefz Award. Congratulations Dr. Moellers and Thanks for your service to America’s Hometown.