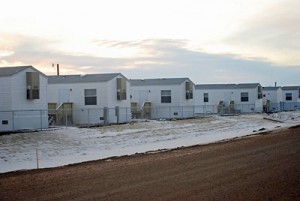 MINOT, N.D. — In the middle of winter, when the temperature slips toward zero and bone-numbing winds blow in off the prairie, living in a Federal Emergency Management Agency trailer may not be hell — it’s way too cold for that — but as the saying goes, you can see it from here.

(PHOTO: The Virgil Workman Village on the southeast edge of Minot, North Dakota, holds 600 temporary housing units erected by the Federal Emergency Management Agency. FEMA officials said the agency built the equivalent of a town the size of Garrison in less than two months. But delays in acquiring units and finding suitable property have postponed the delivery of housing, and hundreds of flooded Minot residents won’t have access to the units until January 1.)

“We basically live in a 400-square-foot icebox,” said Shanda Cool, who lost not only her house, but also the boutique artisan bakery she was on the verge of opening before the Souris River flooded most of central Minot in June.

“The trailer just hemorrhages heat. It gets down to five below and the heater comes on every 15 minutes,” said her husband, Minot State University photography professor Patrick Sheldon. But it could be worse, they reason: Shanda’s brother and his wife share their FEMA trailer with a baby and a stressed-out Great Dane.

Nearly six months after a record-breaking flood wiped out a fourth of the city’s housing and left 11,000 people scrambling for shelter, the grim future that many feared has come to pass: The frigid winter has descended, and hardly anyone is securely back home.

City officials say that only about 10 percent of flooded families have been able to return to fully repaired homes. An additional 20 percent have been able to get enough windows, doors and heat to live in the ruined shells of their houses through the winter.

Thousands are living in bleak emergency trailer lots, and hundreds are still on waiting lists, shuffling among hotel rooms or bunking cheek-by-jowl with friends and family. All have had their lives put on hold as they wait — not just for temporary housing, but for home rebuilding loans and other assistance, and crucially, a decision on permanent flood protection that will determine whether rebuilding is even possible.

FEMA officials initially pledged to have all emergency housing in place by October, giving homeowners temporary shelter through the winter while they sort through their finances. But too few units were ordered and suitable land to put them on proved hard to find; now, federal officials hope the last 206 families can move by the end of this week into the suddenly prized metal-box housing units.

As disasters go, Hurricane Katrina in New Orleans and the tornado in Joplin, Mo., grabbed far more national headlines, not to mention millions upon millions of dollars in quick federal sympathy. Here in Minot, no one died. But the bulk of the city’s oldest, prettiest and most affordable neighborhoods are in shambles, and cash payouts have been minuscule.

“Our problems here are so multifaceted that it’s hard to get your hand around how big the problem is,” City Manager David Waind said.

Thousands of homes were inundated in water 10 to 12 feet deep, heavily laced with sewage and toxic agricultural chemicals, which seeped into drywall, studs and floors, in some cases for a month or longer. Few had flood insurance.

Now, homeowners like Hope and Ryan Anderson are left with homes that would cost half as much as they’re worth just to fix — with no guarantee they won’t flood again. The Andersons got a $30,200 payment from FEMA, bought another house on a hill above town, and are now bleeding the last of their savings paying two mortgages while they wait to see if the city will buy them out of their old house.

Cool and Sheldon had hand-sanded the floors, tiled the shower, and installed shelves in their beloved 1941 Craftsman — which turned into a sodden wreck that reeked of raw sewage when the river flooded. The bank regularly reminds them they still owe $100,000 on the mortgage.

Cool said she approached the Small Business Administration for a loan to fix the house, but was told she’d have to give up the bakery she was preparing to open in an artsy loft downtown — which also suffered devastating flood damage — if she wanted to save her house. “I couldn’t believe they wanted me to choose,” she said.

The couple opted for Cool’s lifelong dream. They let the house slip into foreclosure, moved into a FEMA trailer and are trying to get the bakery up and running. They hope to eventually build a new house with Sheldon’s parents, who also lost their home.

“I don’t necessarily want to move in with my in-laws, but it’s our best option. We have to pool our resources,” Cool said. In the meantime, she’s working three jobs; Sheldon’s working two.

FEMA has given out $89.4 million in individual grants to Minot homeowners and pledged $20.5 million for various restoration projects, a commitment that is expected to increase. But central Minot’s once-gracious old neighborhoods remain ghost towns.

Deanne Criswell, federal coordinating officer for FEMA, said the agency hoped to find ordinary rental housing for most flood evacuees. But the oil boom of the last few years had left the city — even before the flood — with few available units and skyrocketing prices, she said.

The agency wound up putting temporary units in two trailer parks in town, then erecting the equivalent of a new town on the southeast edge of the city; the Virgil Workman Village now holds 600 FEMA units on pads spread across a huge swath of graded, treeless gravel and snow.