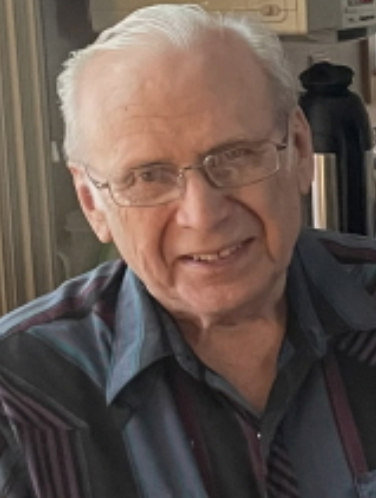 John Wenceslaus Neuzil, aged 83, of Charles City, passed away peacefully on Wednesday, September 14, 2022 at 3:00 p.m. surrounded by his loving family at the Floyd County Medical Center in Charles City.

A Mass of Christian Burial will be held at 11:00 a.m. on Saturday, September 17, 2022, at Immaculate Conception Catholic Church, 106 Chapel Lane, with Father Tom Heathershaw officiating and Deacon Jeff Frieden (grandson) assisting. Burial will be at Calvary Cemetery in Charles City.

Visitation will be held from 9:30 a.m. until the start of the service at the church on Saturday.

John “Johnny” Neuzil, the son of Mary Martinek and Louis John Neuzil, was born May 6, 1939, in Fort Atkinson, Iowa, at his rural home. He attended St. John’s Catholic School from first to eighth grade and then graduated from Fort Atkinson High School in 1957. John enlisted in the United States Air Force (USAF) serving his country from 1958-1961. Following his honorable discharge, he moved to Charles City and worked at Oliver Tractor Company for 21 years.

On December 29, 1962, John was united in marriage with the love of his life Ruth Therese Sloan at St. Mary’s Catholic Church, Waucoma, Iowa. They proceeded to build their life and were blessed with seven children: Dale John (died at birth), Nellie, Patrick, Jane, Jenny, Mary, and John Paul. They spent their first 11 years in town before moving to their dream farm in rural Floyd County in 1974 where John enjoyed building his hobby farm and raising his family.

John was an avid, self-taught guitarist starting at the age of 14 years old when he began “playing by ear”. He shared many stories of playing with numerous different musicians while he was stationed in Delaware and Thule, Greenland. Throughout his adult life, he was a member of numerous Country and Western bands to include: the Rhythm Kings, Country Kings, The Unknowns, Mule Skinners, and Country Gold ending his band days in late 1989.

He later joined a local jam group from 2007 to 2018 where he enjoyed acting as the emcee for the group. He loved sharing his witty humor along with his passion for music with family, friends, and guests. The music never left him, he was singing to the end.

John was a lifelong member of Immaculate Conception Catholic Church. A devoted father and grandfather, he took great joy in his family; always seeking to set an example even when it was hard for him. Throughout his life he also enjoyed woodworking, making furniture for their home and gifts for family and friends.

In lieu of flowers, memorials may be made to the Immaculate Conception Catholic Church.