CEDAR RAPIDS – A convicted Iowa felon is charged with attempted murder for shooting a woman’s husband, and was finally nabbed in Gary, Indiana.

On June 25, 2021, at approximately 9:30 AM, Cedar Rapids police officers were dispatched to the 5000 block of 1st Avenue SW for a report of shots fired. Initial information indicated there was a verbal altercation between two males in the parking lot behind the apartment complex in which shots were fired. A short time later, the victim, 46-year-old Shawn Kelly, arrived by personal vehicle at a Cedar Rapids hospital with a gunshot wound to the leg. Investigators determined Kelly had gotten into a verbal altercation with 42-year-old Damian Johnson over Kelly’s estranged wife. During the altercation, Johnson produced a handgun and fired shots, one of which struck Kelly in the leg. Johnson left the area in a vehicle and was not located. The injury to Kelly was non-life threatening and he was treated and released.

As a result of the investigation, arrest warrants were issued for Damian Johnson on charges of attempted murder, willful injury, going armed with intent, and felon in possession of a firearm. On December 9, 2021, Damian Johnson was arrested in Gary, Indiana, on the outstanding warrants in Iowa and held for extradition. He was ultimately brought back to Iowa and served with the arrest warrants on January 11, 2022, at the Linn County Jail. 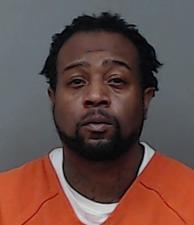 One Response to Iowa felon charged with attempted murder for shooting woman’s husband; nabbed in Indiana